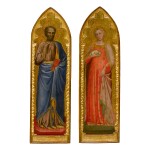 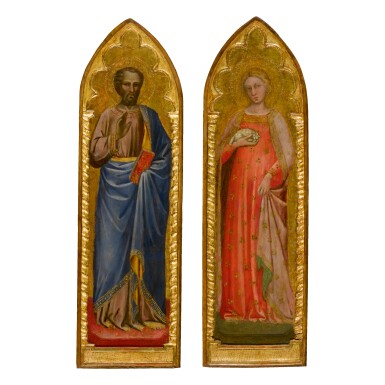 a pair, tempera on panel, gold ground, in an integral frame with arched top and pilasters

The following condition report has been provided by Karen Thomas of Thomas Art Conservation LLC., 336 West 37th Street, Suite 830, New York, NY 10018, 212-564-4024, info@thomasartconservation.com, an independent restorer who is not an employee of Sotheby's

This pair of panels is in good condition overall, with the sensitive details such as the sgraffito elements andmordant gilt ornaments intact. Thanks to a good state of preservation in the paint layers, the bright color palette and proper contrast remain complete. Tiny touches of restoration are found in the faces and hands, but most of the restoration is located in the garments of the figures, where the retouching has shifted slightly in hue, although not to a degree that is visually distracting. In St. Agnes' coral-colored dress the strokes of retouching are slightly pink, while in St. Peter's blue garment the retouching is a shade yellow. The gold has been reinforced via various campaigns over time to compensate for typical wear, with the gilding on the framing elements having the newest appearance. The pictures are coated with a clear, evenly glossy varnish that is free of discoloration. Each vertically-grained panel displays a slight convex lateral warp. If desired, corrective retouching could be undertaken to adjust the hue of the retouching and the gloss of the varnish reduced, but otherwise this pair has no need of intervention and the panels may be enjoyed in their current state.

By whom sold (Property of the Hispanic Society of America, Deaccessioned by Order of the Trustees to Benefit the Acquisitions Fund), New York, Christie's, 26 January 2005, lot 2;

Born in Arezzo to the goldsmith Luca di Spinello, Aretino was precocious and demonstrated his artistic talents early. He trained in the family workshop with his brother Niccolo before studying with local master Andrea di Nerio. In Arezzo, Spinello could have studied the sculptures of Andrea Pisano and the paintings of Pietro Lorenzetti, both of which would influence his religious paintings.

This pair of panels represents Agnes, clearly identifiable by her lamb, and Peter with a book. The pair with their narrow format have often been proposed as lateral pilaster panels for the high altar of Monte Oliveto Maggiore, near Siena. Commissioned in 1384 and finished the following year, the altarpiece was a collaboration between Spinello, the Florentine carpenter Simone Cini, and the Sienese gilder Gabriello Saracini. The altarpiece was first installed in the Olivetan Benedictine church at Santa Maria Nuova, Rome, before being relocated to the order's headquarters near Siena. The altarpiece received special praise from Vasari for its “large number of figures in tempera, both small and great, on a gold ground, [painted] with great judgment” (G. Vasari, The Lives of the Painters, Sculptors and Architects, ed. W. Gaunt, London 1963, vol. 1, p. 180).

The central image of the Monte Oliveto altarpiece was a now-lost Madonna and Child, with a Coronation of the Virgin above and Dormition of the Virgin below, both now in the Pinacoteca Nazionale, Siena. Other panels have been dispersed globally, and can now be found in the Galleria Uffizi, Florence; the Szépmuvészeti Múzeum, Budapest; and the Fogg Art Museum, Harvard University. Two similar panels representing Saints Philip and James the Greater, with identical Solomonic pilasters, framing device, and punch detail in the haloes, are held at the Metropolitan Museum of Art. The large number of panels of standing saints associated with this polyptych suggests that some of the pieces must actually belong to another altar, though it is difficult to tell which (see, for example, Pope-Hennessy and Weppelmann in Literature).