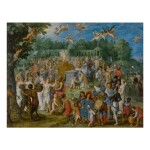 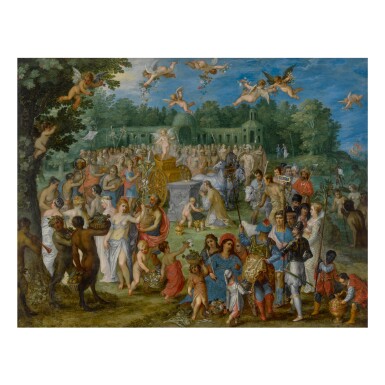 JAN BRUEGHEL THE ELDER and HENDRICK VAN BALEN THE ELDER

JAN BRUEGHEL THE ELDER and HENDRICK VAN BALEN THE ELDER

THE TRIUMPH OF LOVE

This work on copper is in particularly good condition. The copper is flat and reinforced by a five member framework on the reverse. The corners are all healthy. There has been no instability to the paint layer. The work is clean and varnished.

Under ultraviolet light, one can see a thin diagonal line of retouches in the neck and right shoulder of the figure with his back facing the viewer in the lower right. There is another small spot of retouching in the same figure's left thigh. In the lower right, there are two spots of retouching in the tunic of the pageboy in red on the left of the pair. There is a very thin diagonal mark that has been retouched in the back of the kneeling figure before the central plinth. In the upper right corner, there is an area of about 1 inch by 1 ½ inches that shows retouches. There is a restoration in the red robe of the child in the lower center. There are a few other isolated spots, but none of the retouches to the work are of any real significance.

From whom acquired by the present collector.

This meticulously rendered copper depicting the Triumph of Love, is a masterful collaboration between two of the leading artists in Antwerp in the first quarter of the seventeenth century: Jan Brueghel the Elder and Hendrick van Balen. Such partnerships were common during this period and allowed artists to contribute their own specialty to a variety of projects and commissions. In the present example, van Balen was responsible for the myriad of figures and Brueghel the natural and still life elements. Datable to circa 1608, nearly a decade after the two first joined forces around 1600, this work should be considered among the pair's most accomplished joint efforts as it exemplifies a seamless blending of their individual artistic minds into one expertly executed whole.

This vast landscape is framed at left by a lush tree and in the distance by a type of Garden pavilion commonly found, along with lush grounds and a host of flowers, in Flemish allegorical depictions of Spring. Atop a golden chariot led by four horses is a brilliantly illuminated Cupid, the God of Love, who serves as both the visual and thematic focal point for this allegorical scene. This detail loosely recalls a passage from the first book of Petrarch’s Triumph of Cupid, where the poet describes a vision of the young god:

And on a fiery cart a callow boy

With a bow in hand, and with arrows by his sides…

Around him countless mortals,

Some taken in battle and some killed,

And some wounded by his stinging arrows [1].

Surrounding Cupid here, however, are more groups of figures than even Petrarch imagined—both mortal and immortal, religious and pagan, ancient and contemporary. Many carry standards, flowers, and gifts to Cupid, even a clergyman kneels in offering before the god of ancient mythology. The arrangement of figures in this painting parallels the crowded banquet scenes for which both artists are perhaps most well-known, however, according to Ertz, the direct source for this unique iconographic scene teeming with such a diversity of figures has yet to be uncovered.

Although not every figure in this detailed setting can be identified, a number of those most familiar to audiences stem from mythology. To the right of Cupid’s chariot is Zeus with his golden crown and red robe, followed by Mercury with his winged helmet and Hercules with his club and lion skin. On the open sea near the right edge appears Poseidon and possibly Amphitrite, and the bull wreathed in flowers near the water’s edge is likely a reference the abduction of Europa. In the left foreground, partially clothed in a blue dress is Venus, goddess of Love, who is also highlighted against her surroundings. She holds in her left hand a pole—adorned in flowers, artichokes, and a candle, all of which are emblematic references to Love—that points to the outstretched hand of Cupid. Near Venus are two satyrs and two putti, the former holding baskets of fruit in offering to the young God and the latter baskets of flowers, and around behind her are figures crowned in laurel wreaths, one of whom holds a standard with the signum triceps—a Hellenistic figure with the heads of a dog, a lion, and a wolf that symbolizes the three faces of time: past, present, and future.

In the lower right corner are a number of figures that span time, class, and culture. Some are painted with such detail that they seem strikingly familiar, yet their identities remain in many ways just out of reach. Among the most visible in this group is a Roman, garbed in blue and carrying a standard emblazoned with the letters SPQR (Senatus Populusque Romnus or The Roman Senate and People).  In front of the Roman is a richly attired man with exotic attendants, and behind him are various individuals, including an elegant young woman with bare breasts near an aging woman in conservative attire, as well as figures from contemporary Flemish culture, including a maid and a farmer who rests his shovel on his shoulder.

Although parts of this scene still remain a mystery, perhaps the contemporary soldier wearing a helmet and elaborate armor in the lower right foreground plays a pivotal role as a chronicler of the story at hand. What seems to unfold in front of him as he looks upon the landscape is a tale of the timeless and limitless power of Love, whose impact falls on every mortal, god, muse, and season, all of which are represented here showing homage to triumphant god of love at center.