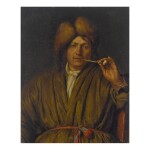 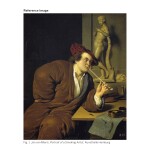 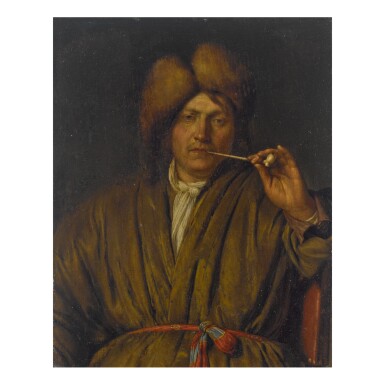 The panel is flat and stable, and beveled along the right edge and part of the bottom edge. The image reads well with fine details such as the man's facial hair and texture of the fur hat retained. Areas of discoloration in the background could be due to old discolored varnish. Small dots of retouching are visible to the naked eye in the background to the left of the man's head. Minor frame abrasion is visible at the bottom edge. Under UV inspection, a few dots of retouching to the left of the man's head and surrounding his hat fluoresce. The painting can hang in its current state. Offered in a brown wood frame.

Frans van Mieris the Elder specialized in small, highly polished portraits and genre scenes in the Leiden fijnschilder tradition, of which the present lot is a charming example. His sons Jan (1660 - 1690) and Willem (1662 - 1747) took over the workshop at his death and followed in his footsteps to produce elegant genre scenes, portraits, and occasionally history paintings. Frans the Elder’s works remained in high demand and fetched high sums through the 18th and 19th centuries and continue to enchant viewers today. Unfortunately, the popularity of the artist has also led to confusion regarding attributions to Frans the Elder and his sons or other followers.

Leiden cloth merchant Pieter da la Court van der Voort (1664 - 1739) was one of Willem van Mieris’s most important patrons and he amassed a huge art collection that included many works by the entire Van Mieris family. De la Court also employed Willem to copy or enhance his father's and his own works. De la Court's collection was auctioned after the death of his niece and daughter-in-law, Catharina Backer, in 1766. The present lot is recorded in this sale, where it was described as signed and dated 1664 or 1667 at the upper right edge. This panel has no evidence of a signature but matches the rest of the description in the 1766 sale catalogue exactly: “Een Man met een bonte muts op zyn Hoofdt, in zyn Nagtrok zittende een Pypje te rooken: heel excellent geschildert, door denzelven, op panel; hoog 6 1/4, breet 5 duimen.” (A man with a fur hat on his head, sitting in his night robe and smoking a pipe: very excellently painted by the same [Frans van Mieris the Elder], on panel; height 6 1/4, breadth 5 inches.)

The absence of a signature does not erase the possibility that this work is by the hand of Frans van Mieris, particularly given the De la Court provenance. The face of the sitter is rendered in remarkable detail, down to the beginnings of a mustache, and the smoldering ash in the pipe is indicated with two tiny dots of red paint. The image is at once a figure study and a genre scene, a relatable subject that invites the viewer's engagement. The paint surface has been well preserved and retains the fijnschilder smoothness and crispness. In addition to affinities with the work of Frans, the portrait also recalls the work of his son Jan, in particular the square shape of the hand that holds the pipe. Jan’s Portrait of an artist smoking a pipe dated 1688 in Hamburg (fig. 1), depicts the same subject matter. The sitter in the latter picture wears an identical japonse rock (Japanese robe) and fur hat and positions his hand in the same way.