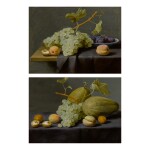 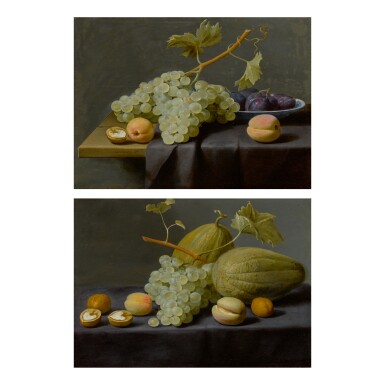 STILL LIFE OF GRAPES, PEACHES, AND A WALNUT, TOGETHER WITH PLUMS IN A BLUE AND WHITE PORCELAIN BOWL, ALL UPON A PARTLY DRAPED STONE LEDGE;

STILL LIFE OF HONEY MELONS, GRAPES, PEACHES, AND WALNUTS, ALL UPON A STONE LEDGE

a pair, both oil on panel

Both panels appear to be made of one board, and they are both flat, stable, and uncradled. The panel with the bowl if plums is beveled on all four edges, while the other is beveled on the proper left and lower edges. Both images read strongly beneath a clean and crisp varnish. There are two horizontal cracks in the panel with a bowl of plums, but these are not distracting. Inspection under UV reveals more recent scattered small spots and fine strokes of retouching, concentrated in the backgrounds and tables of each work and primarily close to the edges. More retouching is visible in the panel with a bowl of plums than the other. In both works, though, there are only a few very small and cosmetic spots and strokes of retouching to the still life elements, for example, in the leaf at upper center of panel with bowl of plums. The paintings can be hung as is. Offered in simply carved darkwood frames.

By whom anonymously sold ("Property from a Private Collection"), London, Sotheby's, 13 December 2001, lot 2;

Along with Osias Beert and Clara Peeters, Jacob van Es was one of the foremost proponents of the Flemish still-life tradition in the seventeenth century. He was active primarily in Antwerp, where he became a Master in 1617 though he did not join the Guild of Saint Luke there until 1645. These signed still-lifes are entirely characteristic of his output, which is most often defined by strongly lit objects upon gently sloping surfaces in a rather subdued setting. Unlike some other examples by the artist, which include passages of high and intense color, the present works are rendered with a more restrained palette, enlivened primarily by the varied shapes of the fruits, the surface, and the scrolling vine leaves.

Bergström has conjectured that Van Es intended for some of his still lifes to be symbolically interpreted. Although the fruit in the present works does not immediately invite a religious reading, the grapes may recall the mystic grape, or human nature of Christ, the halved walnuts may reflect the divine nature of Christ, and the walnut shells may signify the wood of the cross, or lignum crucis [1].