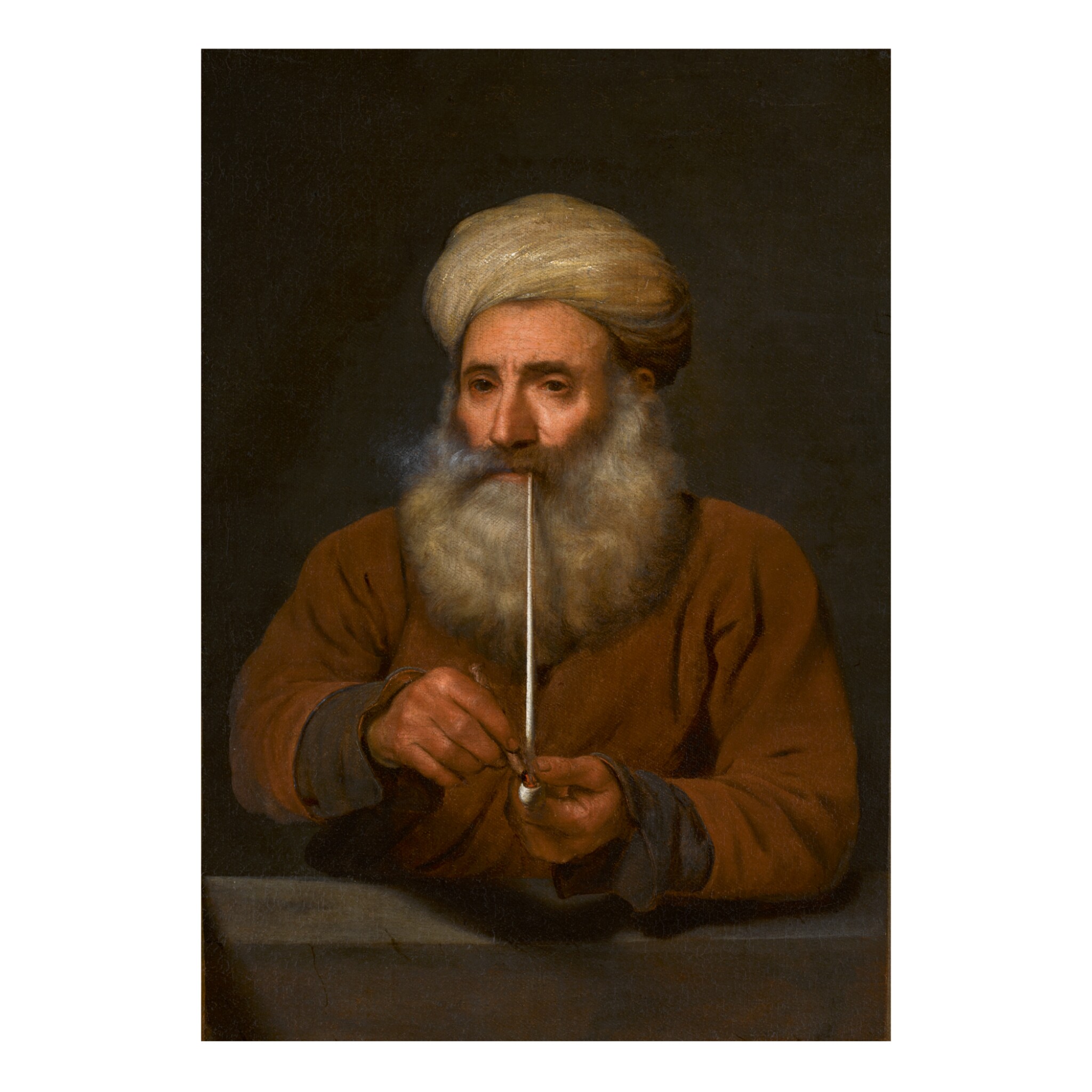 The canvas is unlined and stable with a coarse weave. A thin strip of unpainted canvas is visible along the left and bottom right edges where the paint surface does not reach the frame. The paint surface is stable and well preserved with a clear portrait image that retains texture in the beard and face. Three horizontal lines of repair, 2 in the upper right corner and one on the man’s proper right arm, measure 1 ½ in. each and correspond with weft threads but are not distracting. Under UV inspection, the aforementioned horizontal lines are visible as well as very small dots of retouching scattered throughout the painting to address craquelure. A patch in the background to the left of the man’s head fluoresces unevenly, possible due to varnish. The painting is in overall good condition and can hang as is. Offered in a simple black stained wood frame.

Michael Sweerts is first recorded in Rome in 1646, where he received commissions from Dutch merchants and later from Cardinal Camillo Pamphilj. He painted genre scenes and religious works but is best known for his use of strong chiaroscuro and direct and realistic portraits like the present lot. The turbaned man appears to lean out of a window and looks quizzically off into the distance just askance of the viewer as he lights his clay pipe. A wisp of smoke escapes his mouth and almost blends in with the soft hair of his gray beard. This canvas likely originated in Italy due to its coarse weave, which links it to the Northern artists working in Rome in the mid-17th century.

Sweerts and other artists in the group of Dutch and Flemish artists working in Rome known as the Bamboccianti tended to specialize in what were considered "low" subjects in the eyes of Italian academic painters. The present picture would have been judged as "rough" due to the foreign sitter, the activity of smoking, and the naturalistic details like the man's dirty hands and fingernails. Sweerts's Old woman spinning in the Fitzwilliam Museum (fig. 1) shows similarly unflinching details such as in the woman's wrinkles, the dirt on her clothes and her hands, and her gaunt expression.

Despite the attention to the sometimes unflattering traits of a sitter, Sweerts and his contemporaries were also interested in life study and the academic tradition, as evidenced by Sweerts opening a sort of school both in Pamphilj's residence and at home in Brussels. The combination of acute observation of everyday subjects, use of light and shadow, and interest in technique and precision make images like this one effectively timeless.