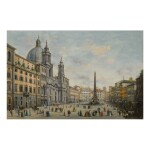 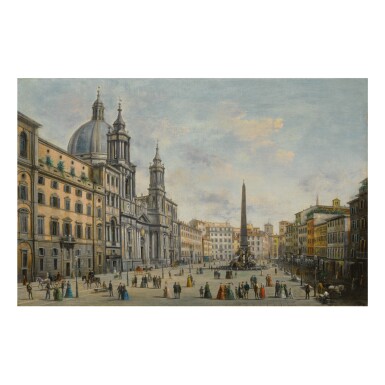 GIUSEPPE BISON | ROME, A VIEW OF THE PIAZZA NAVONA

GIUSEPPE BISON | ROME, A VIEW OF THE PIAZZA NAVONA

ROME, A VIEW OF THE PIAZZA NAVONA

The canvas appears to be unlined or very thinly lined with more modern reinforced lining at the edges. There are six small patches on the reverse of the canvas to address old and small repairs. The painted image is stable, reads well beneath the varnish, and it presents a strong image. There is craquelure scattered throughout, and there is some definition lost in the shadows at right, though these are not distracting to the overall impression. Inspection under UV reveals small spots of repair that coincide with the aforementioned patches, for example in the upper right sky and in spots concentrated towards the corners. There is a thin line of retouching at lower center, and some spots of retouching at the edges. There are scattered spots and strokes in the sky, including some along a faint horizontal line that runs parallel to upper edge. Painting can hang in its present condition. Offered in a decoratively carved giltwood frame.

This grand and elegant view of the Piazza Navona was painted by Giuseppe Bison, the son of the illustrious nineteenth century view painter Giuseppe Bernardino Bison (1762-1844). The young Giuseppe continued in the tradition of his father, imitating his style and subject matter so closely that their view paintings can be easily confused. The present view, for example, compares very closely to a signed and dated example from 1832 by the elder Giuseppe Bernardino that sold recently in these rooms [1]. The inclusion of the tri-partite lamps in the present lot, however, places this work in the lifetime of the son, as such lamps were not introduced into the Piazza Navona until the second half of the nineteenth century.

In the Imperial era, the location of the present-day Piazza Navona was the site of a stadium built by the Emperor Domitian. Bison's painting shows the piazza after its Baroque transformation under the reign of Pope Innocent X: Francesco Borromini's church of Sant'Agnese in Agone can be seen center left, while Gian Lorenzo Bernini's magnificent Fontana dei Quattro Fiumi, with above it the Obelisk of Domitian, stands at the center of the piazza.