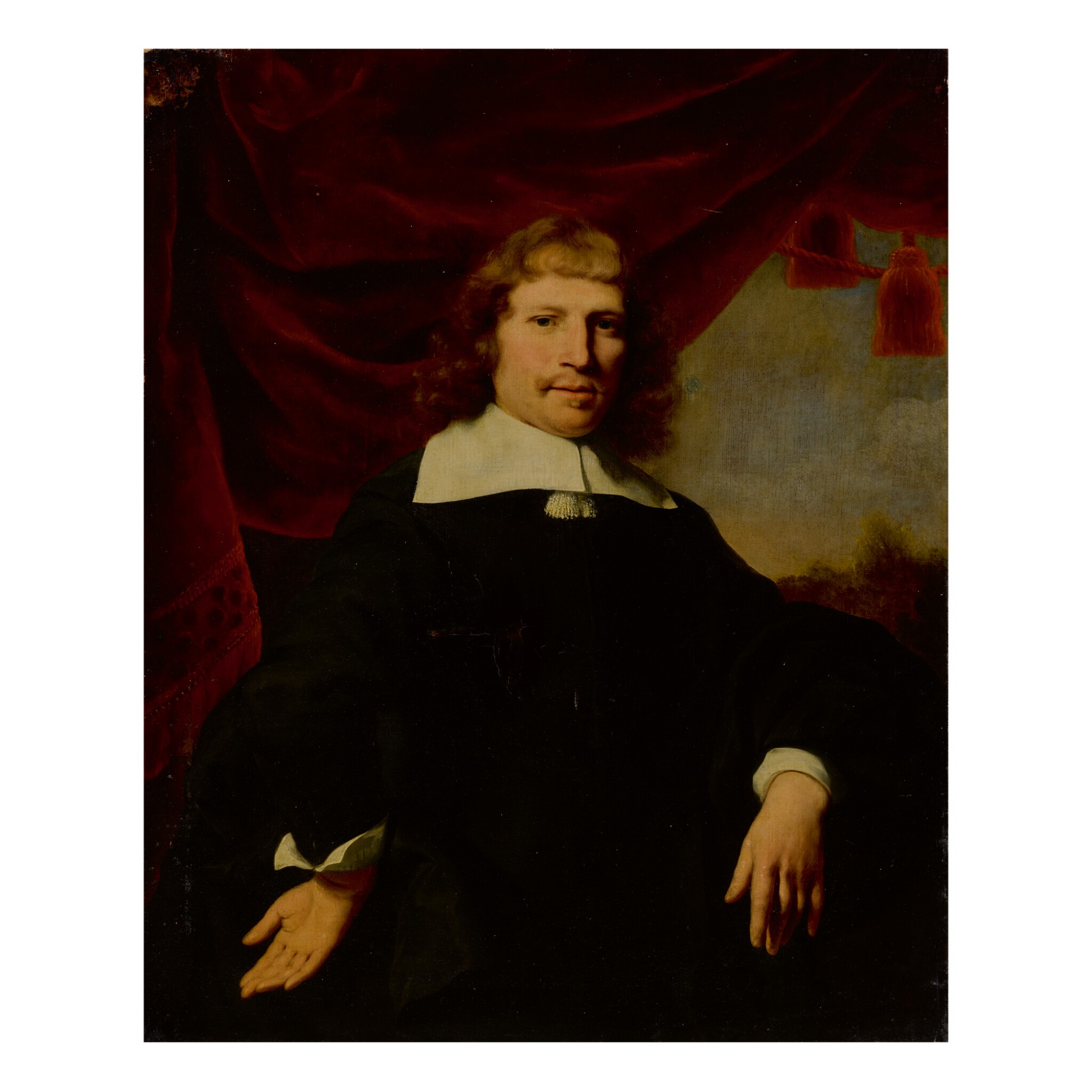 Property of an East Coast Collection

PORTRAIT OF A GENTLEMAN, FACING RIGHT, IN FRONT OF A RED CURTAIN, WITH A LANDSCAPE BEYOND

Canvas is lined and is stable on its stretcher. The image reads strongly beneath an old and slightly discolored varnish. There is a thin 1" vertical tear at center of the sitter's chest, and another thin diagonal tear at upper right, though these are not distracting There is an old repair in the background at upper right with an associated patch on the reverse, and there is an old repair to the sitter's chest at left. Some thinning is visible to the background at upper right, and a line of vertical inconsistency to the surface near the lower left edge. Retouching is visible at all four corners, in particular the upper left, and some small spots are visible in the sitter's hand at right. Inspection under UV reveals an old varnish that is difficult to read through in areas and beneath which there may be an older campaign of retouching. UV also reveals retouching to address aforementioned repairs, including some broadly applied strokes in an area of repair in his left chest. Otherwise the more recent retouches are very few and scattered here and there throughout. Offered in a simply carved stained frame.

Ferdinand Bol, one of Rembrandt’s most talented students, painted this mature and elegant portrait in 1661, at the height of his success within the genre. The handsome sitter, with his engaging eyes and pleasing countenance, looks towards the audience with an air of familiarity. His features are softly modeled by a light that illuminates the scene from the upper left, casting shadows that define his face and hands as well as the fabric of his costume. His powerful and confident pose with his right arm akimbo and his left arm resting upon a ledge, is nearly identical to that found in Bol's portrait from 1650 of Roelof Muelenaer, Amsterdam's postmaster (fig. 1) [1]. While nearly a decade separates the two portraits from each other, together they serve to illustrate the development of Bol's style. By the 1660s, when he executed the present work, his more elegant and independent style had clearly emerged—one that could be distinguished from that of his master.

Bol was born in Dordrecht to Balthasar Bol, a prosperous surgeon, and is thought to have been apprenticed there to Jacob Gerritsz. Cuyp (1594–1651), the father of the landscape painter Aelbert Cuyp, who was at that time the most prominent and versatile artist in Dordrecht. When Bol was nearly twenty years of age, he eschewed the customary trip to Italy expected of a young painter and left for Amsterdam, where he entered Rembrandt’s studio. Bol was apprenticed to his famous master between 1635 and 1641, and, unsurprisingly, this was to be a formative influence upon his subsequent career. Upon the death of his father and his ensuing inheritance, Bol established himself as an independent artist at the age of 25, and his first signed and dated works appear from 1642 onward.

In composition and handling, the present portrait can be also compared to a portrait of a lady sold recently in these rooms [2]. In both works, the sitters are garbed in similar heavy fabrics and they are set before a red curtain that opens to reveal a landscape. The rich red drapery provides a sense of gravitas to the scene and enlivens the dark fabrics that adorn the figures. At the same time, the present portrait seems to foreshadow the compositions Bol would complete later in the same decade, such as his famed life-sized portraits of Michiel de Ruyter from 1667 [3].