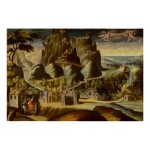 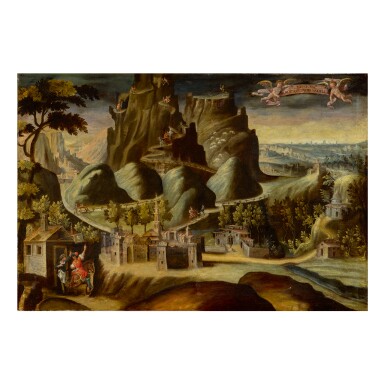 LANDSCAPE WITH THE LEGEND OF IL GUERRIN MESCHINO

This fantastical landscape fits into a tradition popularized by Northern painters active in Italy, such as Paul Bril (1554 - 1626) and his circle. The unusual subject comes from an Italian chivalric romance that translates to "Wretched Guerrin," written by Andrea da Barberino before 1410 and first printed in 1473. Guerrino, the protagonist, had been cast away at sea as a baby and sold by pirates, and later raised by Meschino (a name meaning shabby, ignoble, or unlucky). He embarks on a quest to find out his true heritage, and along the way encounters many characters who give him moral challenges or offer him supernatural trades. Combining Christian and pagan motifs such as Purgatory and the Sanctuary of the Sun and Moon, the romance travels through a fictional Mediterranean landscape and ends in the grotto on Monte Sibilla in the Appennines. There, Guerrino meets a Sibyl who reveals that the hero's real father is Milone, Duke of Durazzo and son of a Duke of Burgundy. Guerrino thus discovers he is of noble blood, and finally lives up to the name Guerrino, which is a derivation of "warrior."