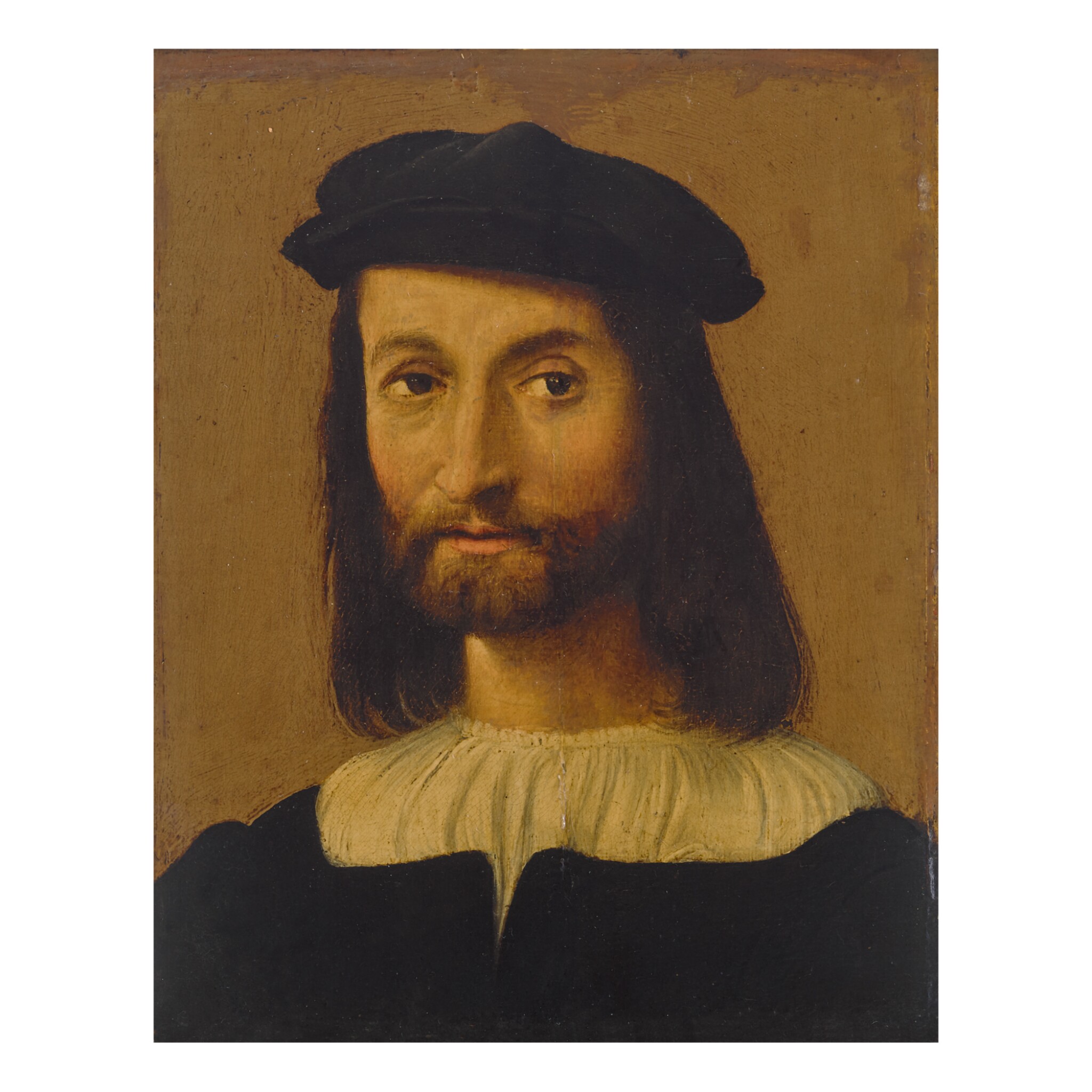 PORTRAIT OF A BEARDED MAN IN A WHITE SHIRT, BLACK DOUBLET AND BLACK CAP, BUST-LENGTH

The panel is flat, cradled, and unbeveled. A thin crack running the length of the panel through the center has been recently repaired and is stable. The paint surface is well preserved despite yellowing varnish and a detailed portrait image reads well. Retouching to address the crack and frame abrasion along all 4 edges is barely visible to the naked eye and is not distracting. Under UV inspection, a thick varnish is difficult to read through. A recent campaign of very fine retouching is visible along the vertical crack as well as four pin dots, one in the background and three in the man’s hair. Offered in a simply carved enclosed giltwood frame with a decoratively carved liner.

This small portrait is the work of an as-yet unidentified artist working in central Italy in the early 16th century and inspired by Raphael. The man’s costume dates this portrait to 1505-1510, and certainly no later than 1515. While the small size is unusual in portraiture of this period, the composition is complete and the portrait is not a fragment. The likeness may have been intentionally portable, and the remarkable amount of detail in the sitter’s facial features and hair allow for close study.

Though the artist remains anonymous, Linda Wolk Simon has suggested that the sitter is Marcantonio Raimondi (1480 – 1534), the engraver who was instrumental in the use of the medium to reproduce paintings. Marcantonio’s appearance is known through Raphael’s portraits of him, one of which is the chair-bearer at the left in The expulsion of Heliodorus from the temple in the Stanze di Rafaello in the Vatican Palace. A traditional oil portrait by Raphael, now lost, has been preserved in the form of many engraved versions, and shows the same features as the present sitter. The straight brown hair that falls halfway between the chin and shoulders, trimmed beard, thin eyebrows, and long, narrow nose are common to both men, and the black cap worn by the present sitter also appears in some of the engraved images of Marcantonio. The engraver would have been 30 years old in 1510, the approximate date of this painting, which is a logical age for this sitter.

Marcantonio received his first training from Bolognese painter Francesco Raibolini, called Francia (1450 – 1517/8), whose influence can also be seen in this portrait, specifically in the fine, crisp detail. The portrait was previously attributed to Florentine artist Franciabigio (1482/3 - 1525), who himself was inspired by Raphael's work in Florence. The artist was likely of Bolognese or Florentine origin, and at least familiar with Raphael's work in Rome around 1510, if not in his artistic circle.