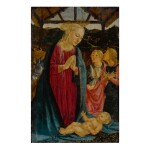 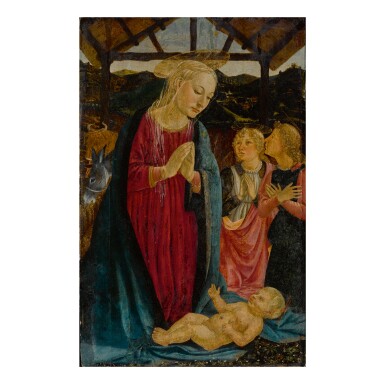 The panel is warped with space between the panel and frame. The image reads well despite old varnish. A thin crack runs the length of the panel along the left edge and has been repaired, as well as 2 smaller vertical repairs to the right of Mary's head. At the lower left, a one inch diagonal crack is visible and unrepaired. Craquelure is stable and most pronounced in Mary's face. Under UV inspection, the aforementioned repairs fluoresce as well as small retouches to Mary's dress and throughout the donkey's face, the stable roof, the faces of the angels and the figure of the infant Christ. Underdrawing is also visible under UV light in the hands of Christ and the angels. Offered in a carved gilt wood frame in the form of an altar.

This devotional painting has been associated with Cosimo Rosselli since its discovery in the 20th century and Everett Fahy confirmed the attribution in 2001. Cosimo apprenticed with Neri di Bicci and received commissions from the German community in Florence throughout his career. His best known project is undoubtedly the frescoes for the Sistine Chapel, on which he collaborated with Perugino, Sandro Botticelli, and Domenico Ghirlandaio in 1481-2.

The present lot dates to the late 1470s, around the time that Cosimo painted the frescoes for the forecourt of SS. Annunziata in Florence. The iconography of the Virgin adoring the Christ Child is not based on a Biblical story, but rather is intended to inspire the viewer's personal devotion to Christ. The popularity of this subject among Cosimo's patrons is evidenced by variants of this composition in the Samuel H. Kress Collection (Columbia Museum of Art, South Carolina), in the Medici Villa at La Petraia, and sold 27 March 2015 at Koller in Zurich (lot 3006).

The frame for this panel was created by Kahlil Gibran (1922 - 2008), a Boston painter, sculptor, and restorer known as a "master of materials."