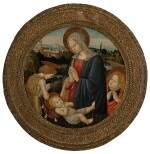 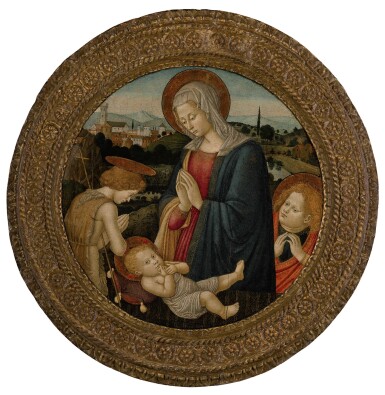 PSEUDO-PIERFRANCESCO FIORENTINO | MADONNA AND CHILD WITH THE INFANT ST. JOHN THE BAPTIST AND AN ANGEL

PSEUDO-PIERFRANCESCO FIORENTINO | MADONNA AND CHILD WITH THE INFANT ST. JOHN THE BAPTIST AND AN ANGEL

MADONNA AND CHILD WITH THE INFANT ST. JOHN THE BAPTIST AND AN ANGEL

tempera on panel, a tondo

This painting is in sound condition overall and presents nicely. Retouching is found throughout the picture to knit together wear and what appears to be old cleaning damage. Miniscule pitting in the paint layers has been addressed with an almost pointillistic style of restoration that gives the impression of a patina of age. The gold patterns appear to be reconstructed. The panel with its integral frame displays an overall transverse curvature and appears to be structurally sound. Modern crossbars have been attached to the reverse to provide additional stability. The painting shows no need of treatment and can be displayed in its current state.

The Pseudo-Pierfrancesco Fiorentino was a name coined by Mason Perkins in 1928 to describe the group of diverse paintings first isolated by Bernard Berenson. In 1976 Federico Zeri noted that this "artist" was in fact several hands using compositions, figural groups, and motifs from Filippo Lippi and Pesellino.1 It is possible that the workshop had direct contact with these two artists and employed cartoons or copied from original paintings. Creighton Gilbert proposed in 1988 that the Pseudo-Pierfrancesco Fiorentino can be identified as Riccardo di Benedetto, also known as "Riccardo delle nostre donne" for his painted Madonnas.2 In any case, this artist or workshop specialized in half-length Madonna and Child compositions with limited variations in the background or in the attendant saints or angels. This compositional type is derived from Filippo Lippi's Adoration in the woods in the Gemäldegalerie, Berlin.3 A tondo with a composition nearly identical to the present, with the cityscape background replaced with a gold ground, was formerly in the Palazzo Rossi, Bologna, and sold at Sotheby's London, 8 December 1976, lot 66. Another close comparison is the tondo at Bob Jones University Art Museum, which replaces the small angel at right with a taller angel holding lilies, but which also has a sprawling landscape background.4

As is typical with the works given to the Pseudo-Pierfrancesco Fiorentino, the painted surface and frame together consist of a single piece of wood.