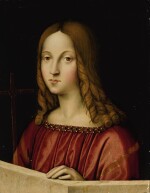 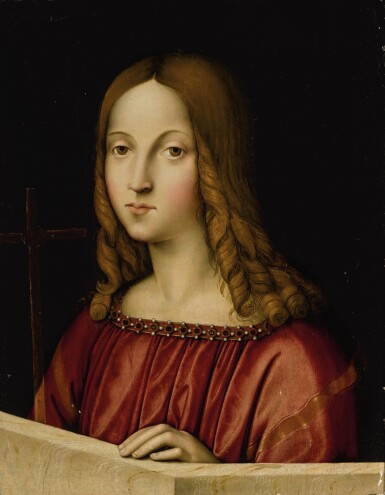 active in Mantua, first half of 16th century

This lot is offered unframed.

This anonymous painter is named for the altarpiece depicting the Madonna and Child with the Blessed Hosanna Dressed as St. Catherine, St. Vincent Martyr, and Other Saints in the Church of San Vincenzo Martire, Mantua. He worked in the circle of Francesco Bonsignori, and has sometimes been identified as the latter's brother Bernardo, but he drew influence as well from Andrea Mantegna, Pietro Perugino, and visionary itinerant painters. Andrea Ugolini expanded the master's oeuvre in a 2008 article (see Literature). The asymmetrical facial features of the young Christ resemble those of many of the Master of San Vincenzo's portraits, which are typically composed of a sitter turned three-quarters, resting one hand on a sill.1 This pose apparently derives from a Bonsignori painting of the young Christ in the Philadelphia Museum of Art.2 The Master of San Vincenzo employed the same format for two similar paintings of the Young Christ, one with a landscape background and one with a dark, nondescript background like the present.3 Neither of the other examples includes a cross, and indeed the cross in our painting appears to be a later addition to clarify the subject's identity. We are grateful to Mattia Vinco for confirming the attribution to the Master of San Vincenzo on the basis of photographs.