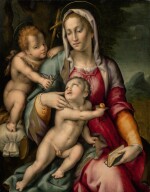 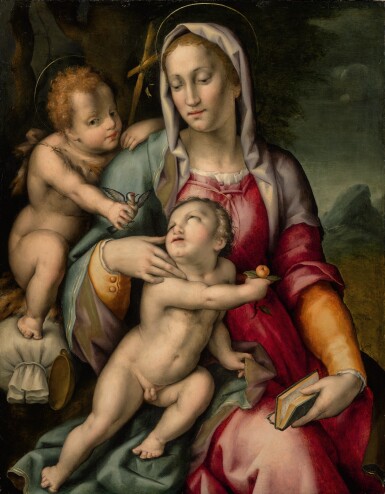 THE MADONNA AND CHILD AND THE INFANT SAINT JOHN THE BAPTIST

There acquired by present owner.

Foschi worked in Andrea del Sarto's studio until the latter died in 1530, and his master's influence is apparent in this devotional composition. In color scheme and figural arrangement Foschi's painting recalls Del Sarto's Medici Holy Family and the figure of the Infant Christ, with his upturned face and twisted pose, is inspired by the Bracci Holy Family, both pictures in the Pitti Palace, Florence.1 The full range of bold colors and acidic tint to suggest iridescence on the Madonna's clothing is characteristic of Florentine painting in the early 1520s, and the twilight landscape compares to early Bronzino paintings such as the Dead Christ with the Madonna and St. Mary Magdalen (Galleria degli Uffizi, Florence).2 Foschi's individual style is also visible in the sculptural drapery with folds parallel to the picture plane. Despite the early Mannerist stylistic influence, Foschi's iconography is straightforward and closer to High Renaissance altarpieces. In this way the painting looks forward to the standard of clarity enforced during the Counter-Reformation, unlike the deliberately complicated iconography of Foschi's contemporaries. The Christ Child holds an apple, symbol of the original sin from which He would save mankind. Meanwhile the infant St. John the Baptist offers Christ a goldfinch, a symbol of the eventual Passion because the bird eats thistle seeds reminiscent of Christ's crown of thorns.