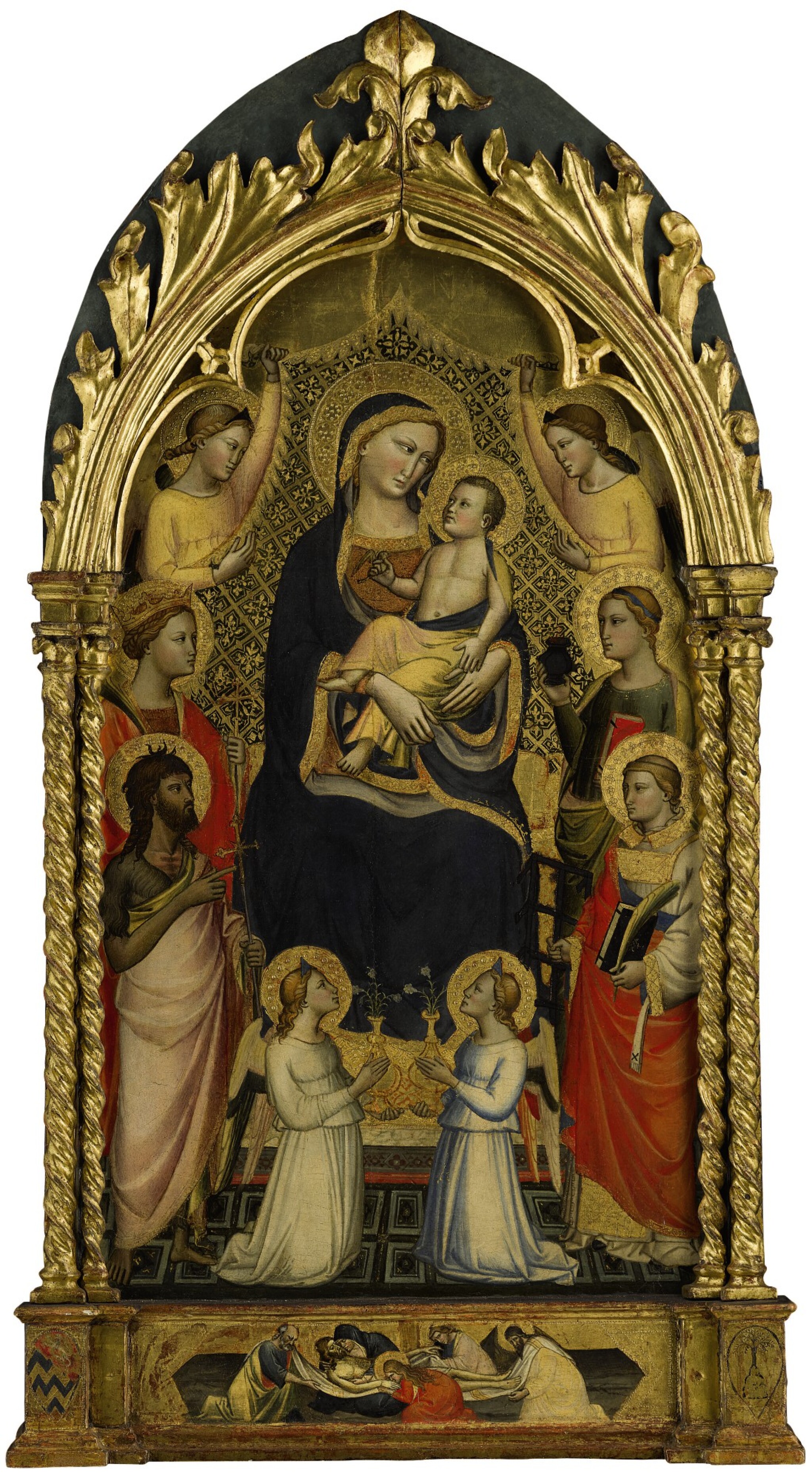 MADONNA AND CHILD ENTHRONED, SURROUNDED BY SAINT JOHN THE BAPTIST, MARGARET OF ANTIOCH, SAINT LAURENCE, SAINT LUCY, AND ANGELS, THE PREDELLA ILLUSTRATED WITH THE DEPOSITION OF CHRIST

tempera and gold ground on panel, with an arched top, in an engaged frame

This recently rediscovered panel is entirely characteristic of the output of the Florentine artist Niccolò di Pietro Gerini. Datable to the early 1390s, it displays the gracefulness for which he is well-known and exemplifies the types of devotional works that enjoyed wide popularity in Florence during the last decades of the 14th Century. The two coats of arms visible to the left and right of the predella probably allude to a marriage union between two Florentine families: in the lower left is the arms of the prominent Rucellai family and in lower left is possibly the arms of the Della Casa family, originally from Mugello.

When this painting reappeared at auction, the catalogue entry recorded Everett Fahy’s endorsement of its attribution to Niccolò di Pietro Gerini, an attribution still widely accepted by the scholarly community today.1 Gerini’s prolific and lengthy career spanned nearly six decades (documented circa 1360-1415), and he was influenced by a tradition first established by Giotto, followed by Taddeo Gaddi, Bernardo Daddi, and Andrea di Cione, called Orcagna. The kneeling angels in the present panel, for example, find their roots in Giotto’s Ognissanti Madonna of circa 1300-1305. The decorative fabric with a lozenge pattern serving as a backdrop for the solidly enthroned Virgin and Child follows models first adopted by Daddi and his workshop. An innovative collaborator, Gerini is known to have partnered regularly with contemporary artists including the Master of the Misericordia (possibly identified as Taddeo Gaddi’s Son, Giovanni), Jacopo di Cione (the brother of Orcagna) in the early 1380s, and later with Lorenzo di Niccolò.

Instead of a dating to the 1370s as previously suggested, this panel stylistically compares more closely to Gerini’s output from the first half of the 1390s, a moment when the artist turned away from the more rigid and linear style of Orcagna, as a result of his previous contact with the Master of the Misericordia and Jacopo di Cione. During this decade, Gerini’s output is defined by softer and more modulated contrasts between lights and darks, as well as a greater delicacy in renderings of fabrics. In addition, his rosy-cheeked figures display a greater air of sweetness and familiarity through their exchange of glances and their interactions. This painting bears notable similarities in composition, particularly in the solidly enthroned central figures and the foreshortened floor tiles, with other works by Gerini dated to the 1380s and early 1390s, including two panels depicting a Madonna and Child enthroned with Angels and Saints,2 as well as his triptych of the Madonna and Child Enthroned with Saints Nicolas, Laurence, Bartholomew, and a Bishop Saint.3

The identification of the Rucellai arms on the predella is certain. The other coat of arms with the olive tree on a six peak mountain bears most similarities with those the Della Casa family, but also loosely compares with the Bindi and Panuzzi families. Although no marriages in the last decades of the 14th century between the Rucellai and Della Casa families have yet been found, several marriages between the two families in following generations confirm their connection.

We are grateful to Dr. Silvia De Luca for her assistance in the cataloguing of the present lot

1. The Gerinesque qualities of this painting were probably suggested by Richard Offner, and this painting was first published by Hayden Magginnis as Workshop of Niccolò di Pietro Gerini. On the back of a photo conserved in the archive of the Corpus of Florentine Painting (Florence) appears an attribution to Lorenzo di Niccolò.

2.  One of these appeared on the art Market in London in 1972 and the other is formerly recorded in the Volterra Collection, Florence. See M. Boskovits, Pittura Fiorentina alla vigilia del Rinascimento, Florence 1975, pp. 409, 411, reproduced figs. 189 and 190.

3.  The central panel of this triptych is today preserved in the Church of San Martino a Mensola in Florence, while the wings with the saints are found in the Uffizi Gallery Florence (inv. 1890, nos. 10584 and 10585).