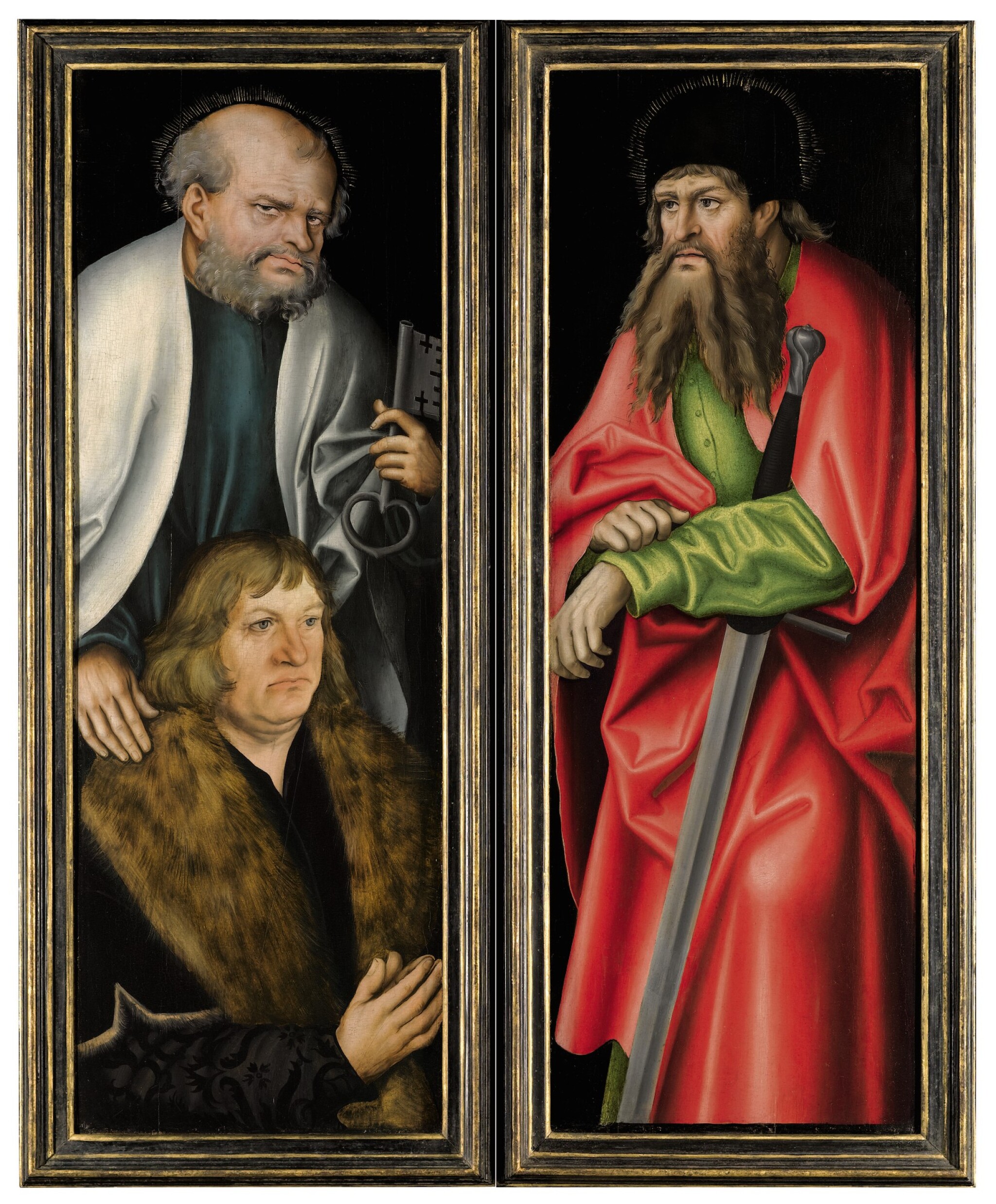 THE LEFT AND RIGHT INTERNAL WINGS OF THE FEILITZSCH ALTARPIECE:

both oil on panel, marouflaged

Commissioned from the artist by either Jobst von Feilitzsch or, more likely his sons, for the family chapel at Rittergut Kürbitz in 1511;

By descent in the Von Feilitzsch family until circa 1947;

Acquired directly from the Von Feilitszch family by Heinz Kisters;

By descent to Adenauer's heirs, by whom sold back to Heinz Kisters;

Anonymous sale "Property from a Distinguished Private Collection," London, Sotheby's, 4 July 2012, lot 7 (together with the central panel and outer wings, for £4.3 million with premium).

These panels by Lucas Cranach the Elder rank as one of the best extant examples of the artist's exploration of portraiture and physiognomy. Saint Paul appears on the right, while Saint Peter, with his direct and arresting gaze is on the left, his right hand resting on the shoulder of the kneeling donor, most probably Jobst von Feilitzsch.  The panels served as the left and right inner wings of Cranach’s Feilitzsch altarpiece, which remained for almost four hundred and forty years in the family church of the patrons who commissioned it.  Dating to circa 1511-1512, these early works arose during a pivotal moment in the artist's career—a moment at which he was creating his most brilliant masterpieces in the Court of Saxony.  There are few works of art from this prolific moment in the history of German art that trumpet so loudly the fully-fledged Renaissance in Germany and that draw so obviously and seamlessly on influences from the Netherlands, Italy, and from within Germany itself.

In 1504, Cranach was called from Vienna north to Wittenberg, the Electoral Capital of Saxony. When he arrived, he succeeded Jacopo de’ Barbari as court painter to Duke Frederick the Wise and the Electors of Saxony. Here, Cranach quickly became one of the most sought-after artists, garnering attention for the speed, efficiency, and ingenuity with which he worked. His reputation certainly was known by the von Feilitzsch family, who were not only close with Frederick the Wise but whose estate at Rittergut Kürbitz was in southern Saxony, only about 50 miles from Wittenberg and Frederick's court. Cranach remained in Wittenberg until 1550, when he moved to Augsburg, following his then patron, John Frederick, the nephew of Frederick the Wise.

Cranach's early Wittenberg output preserved the dazzling color of his earliest Viennese period, and at the same time became more indebted to the style and tradition established by Albrecht Dürer. During these youthful years, he explored synthesizing vibrant coloration with dark backgrounds, and he also developed a heightened interest in the expression and realism of his figures—technique arising not only from Dürer's influence, but also from Cranach's travels to the Netherlands in 1508, where from the likes of Quentin Massys, he learned an increased sense of empathy for his subjects.

Emerging from the stark black background of these large panels are three striking figures who are vividly colored and expertly rendered. Cranach's distinct and confident hand is visible throughout. He painted the portrait of Jobst von Feilitzsch and the heads of both saints directly onto the prepared panel surfaces without any use of underdrawing, a feature that, combined with the stylistic elements, is evidence of his sole authorship in these principal elements. Underdrawing laid out by Cranach is visible elsewhere in the panels, and while there may have been help from a workshop assistant in some of the drapery of the costumes, a common practice of the period especially for works of this size, Cranach was the central force in the creation, layout, and execution of this project.

Jobst von Feilitszch's portrait in the left panel demonstrates how Cranach was no longer working in the wake of Dürer, but concurrently with him. It draws on the realism and psychology of Dürer's earlier portraits, and yet its softer and more-mannered touch would preempt a new age of German portraiture in the decades and years to come.1  The kneeling Jobst is shown here dressed in the same fashionable wide-fur collar and fur-trimmed half-sleeves worn by Frederick the Wise in Cranach's portrait of him, today in the Kunstammlung der Veste Coburg (fig. 1).2 Like Frederick, Jobst places his hands in prayer, joined only at the fingertips. His fulsome chin, heavy jaw, and bulbous nose are described in meticulous detail, while his foreboding figure is lent further gravity by the comforting hand of the protective Saint Peter. The softness of his fluidly executed and ample contours recalls Cranach's circa 1509 portraits of John the Steadfast and his son John Frederick in the National Gallery, London (fig. 2),3 as well as the 1511-12 portrait of the Margrave Albrecht of Brandenburg-Ansbach.4

The figures of Saints Peter and Paul here find their most striking comparison in two small panels in an English private collection, dated slightly later to circa 1515 and most recently exhibited in London and Frankfurt in 2007-2008 (fig. 3).5 While those panels, especially Saint Peter, are clearly indebted to the present examples in design and overall impression, the two pairs of panels were intended for different purposes. The present saints, which are larger in size, were meant to be viewed as part of a larger altarpiece from a distance. As such, certain features, such as heavy eyelashes, would have needed to be exaggerated. The smaller panels mentioned above, on the other hand, were cabinet pictures meant to be viewed from a very close distance, requiring greater attention for small details and modelling.

The present panels once formed the left and right inner wings of an altarpiece that was commissioned from Cranach by the sons of Jobst von Feilitzsch in their father's memory in 1511 for the Salvator church, located on the von Feilitzsch estate in Kürbitz, and whose patron saints were Peter and Paul. The central panel showed the Virgin and Child with Saint Anne, whose relic was brought back to Saxony by Frederick the Wise in 1493 after a trip to the Holy Land, accompanied by two members of the von Feilitzsch family, one of whom was most probably Jobst. The outer left and right wings showed Saint John the Evangelist and Saint Catherine of Alexandria.

The precise original intended form of this altarpiece is unknown, since the original framing device no longer exists. Around 1624/1626, an additional chapel was constructed in the family church by a descendant of Jobst, Urban Caspar von Feilitzsch, who rearranged the altarpiece in a heavy baroque frame as a Schaubild, with five panels lined up horizontally in a row. While it is possible the panels were originally so-arranged, it is probable that they were also conceived in a manner resembling a folding triptych.  An inscription on the 1624/1626 includes what is either a transcription from the original frame, or a newer explanatory inscription provided by Urban Caspar, that further reveals details of the original altarpiece's origin. Roughly translated, that text reads:

Year 1511, on St. Matthew's Day,6 the honorable and strong Jobst von Feilitzsch, for whom God's grace gave for sons Moritz, knight of Drewen, Urban of Korwitz [sic], Eberhard and Friedrich.

This inscription is signed with initials V.C.V.F. (Urban Caspar von Feilitzsch). It tells us that Urban, Jobst's second son, took over the estate, and it was probably he who commissioned the altarpiece from Cranach for his father.7 The donor in the left wing is unlikely to be Urban, who was born in 1480 and, as revealed by the portrait on his tombstone, wore a beard. It most certainly portrays Jobst, Cranach basing his portrait either on one he had previously made of him in life, or from other extant portraits of him, whether drawn, painted or carved. Jobst would have been about fifty years of age in 1511 (his birth date is unknown), and Werner Schade has noted a similarity with this figure and the sculpted portrait of Jobst on his tomb in the same church. The kneeling donor on the left wing of Cranach’s Altarpiece of the Holy Kinship of circa 1510 in the Staatliche Galerie in Dessau, is Jobst’s contemporary, Frederick the Wise, who was born in 1463 and who is shown similar in age to the present donor.8

6. This holiday is celebrated on February 24.

7. As also confirmed by archival material.