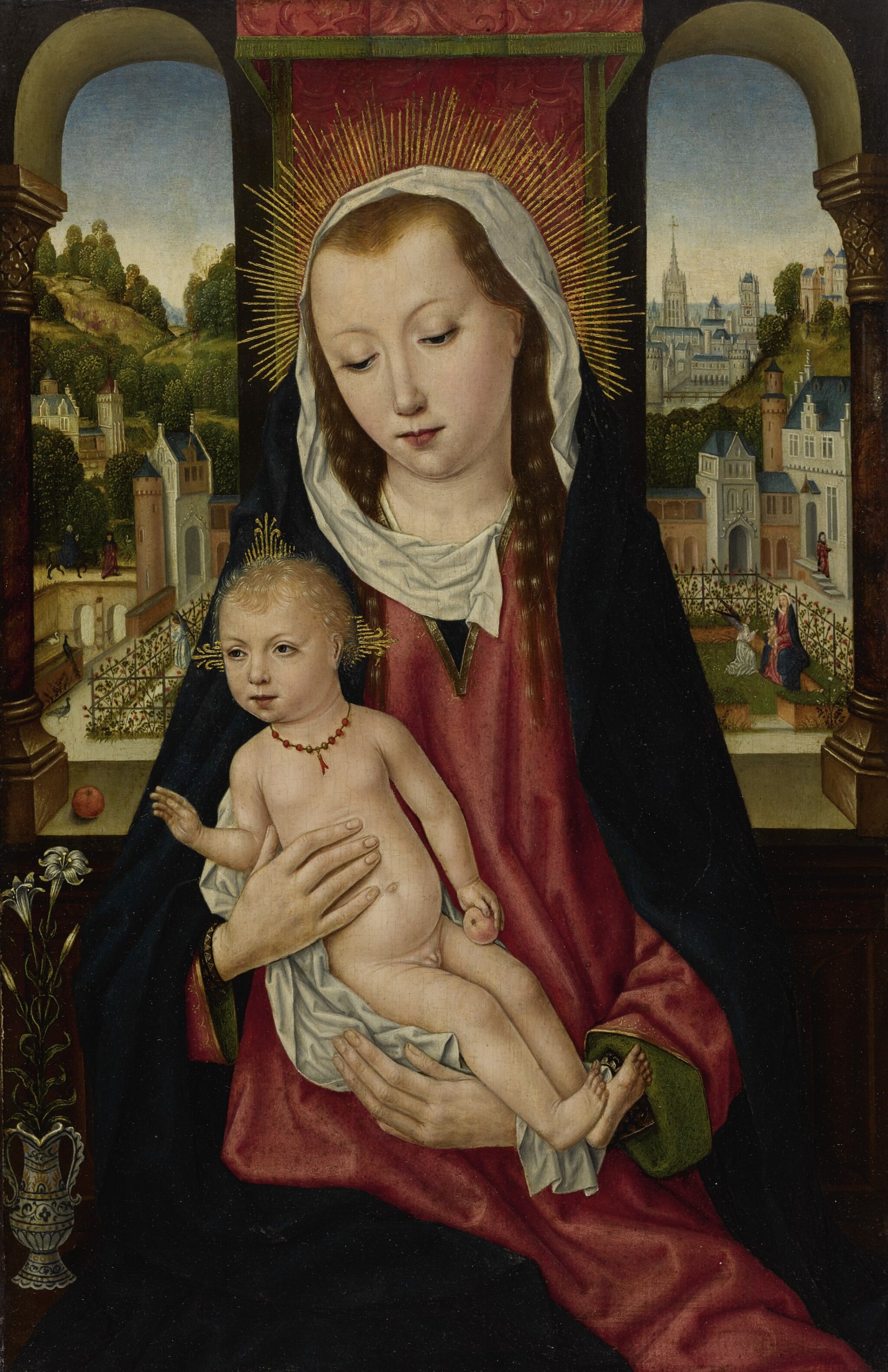 MADONNA AND CHILD, HALF LENGTH, WITH AN EXTENSIVE LANDSCAPE SEEN THROUGH TWO WINDOWS BEYOND

This painting is in good, sound condition overall with potential for appearing even more attractive with some attention. Beautifully preserved details are evident throughout the picture. Retouching addresses visually distracting woodgrain and some losses the sky, two losses that extend from the cloth of honor into the top portion of Mary's face, and scattered minor defects of no great significance. The vibrancy of Mary's blue mantle is subdued by dirt and old varnish that has collected in the surface texture of this passage. The halos have been reinforced with gold paint. The vertically grained wood panel appears to retail its original thickness and dimensions. The aesthetic strengths of this delightful rendering are somewhat depressed by the aging restoration and discolored varnish. Cleaning to remove the old restoration and varnish is expected to result in noticeable improvement to the overall appearance.

Thence by descent to the present owners.

Dated to the first half of the 1480s, this sophisticated and beautifully rendered panel is among the finest examples by the Master of the Bruges Legend of Saint Ursula, one of the most accomplished anonymous Flemish masters of the late 15th century. Not to be confused with the Cologne master of a nearly identical sobriquet, he is named for a polyptych of six panels and two shutters in the Groeninge Museum in Bruges, which represents the story of Saint Ursula as told in the The Golden Legend of Jacobus de Voragine.  The first attempt to construct a stylistically consistent oeuvre for this artist was made by Pierre Bautier,1 and was later further developed by Georges Marlier who in 1964 produced a complete catalogue raisonné of his paintings, which included the present work.

For several reasons, it can be assumed that this Master established a workshop in Bruges that was probably active from the 1470s to the 1490s. He is closely associated with Hans Memling (or Memlinc), a German artist who moved to the Netherlands and worked first with Rogier van der Weyden in Brussels, finally settling in Bruges. A further reason to link the master to this city is the frequent inclusion of the Bruges townscape in the background of his works. In the present painting, Bruges' bell-tower, the tall spire of the Church of Our Lady, and two of the city's powder towers are seen in the distance at right.

The present Master's eponymous Saint Ursula Polyptych mentioned above was almost certainly painted in Bruges, and according to Friedländer, predates Memling’s masterpiece of the Shrine of Saint Ursula, documented as completed in the fall of 1489 and now also in the Groeninge Museum in Bruges. In addition, the present work should date to the first half of the 1480s, since the bell tower seen is shown in its pre-1483 state, after which time it was rebuilt. There is, in fact, only one painting by this master bearing a date, the year 1486 on the right wing of a diptych in the Koninklijk Museum voor Schone Kunsten in Antwerp.2  That painting, which includes three donors on one of the wings, has enabled scholars to attribute a small handful of portraits to the Master of the Bruges Legend of Saint Ursula.

His Portrait of Tomasso Portinari in the Philadelphia Museum of Art (fig.1) has been linked as possibly one half of a diptych with the Virgin and Child in the Fogg Art Museum.3  It seems possible, however, that the Philadelphia portrait could just as readily be paired with the present work, because like it, two windows behind the principal figure at center reveal a garden, a distant town, and a landscape. Moreover, the similar sizes suggest that they could have been once joined together as a diptych (the present panel measures 41 by 27 cm; the Philadelphia example measures 42 by 29.8 cm). Of course, the problem remains that if Tomasso Portinari were to the right of the Virgin and Child, the Christ Child’s gesture of blessing would be directed away from him.

There are a number of depictions of the Madonna and Child by the Master of the Bruges Legend of Saint Ursula that are stylistically close to the present painting, and perhaps Friedländer describes these common characteristics most succinctly: “The broadly parted hair grows deep into the low foreheads and is bunched at the sides, the ears form a narrow crescent, the large eyes are dark and without highlights, the large mouths firmly closed, the shadows rather heavy. The hair cascades to the shoulders in waves, its texture and marked by lines of light that occasionally cross. The hands are often short, plump..., but occasionally – and almost always when the master is demonstrably copying after Rogier – long and well-shaped.” Based on the beautiful rendering of the hands and the basic reliance on Rogier van der Weyden, Friedländer would have placed the present painting into the category of the more "Rogerian" types that he so admired.

The many half-length devotional images of the Madonna and Child that were produced in the last quarter of the fifteenth century in the Netherlands go back to the precedent of Rogier van der Weyden. The half-length painting of this subject by the present master in the Metropolitan Museum of Art (fig. 2) is based directly on the full-length Madonna and Christ Child in Rogier van der Weyden’s Saint Luke Drawing the Virgin in the Museum of Fine Arts Boston.4  One drawing survives from Rogier's workshop that could hold a clue as to how the image was disseminated throughout Flanders (fig. 3).5 The popularity of the Madonna and Child seen at half-length is attested by the many Netherlandish paintings that survive. It was the ideal subject and scale for a private, devotional panel, and one specific example might point to the success of the present painting, namely what appears to be a copy or second version that is unfortunately now lost.6