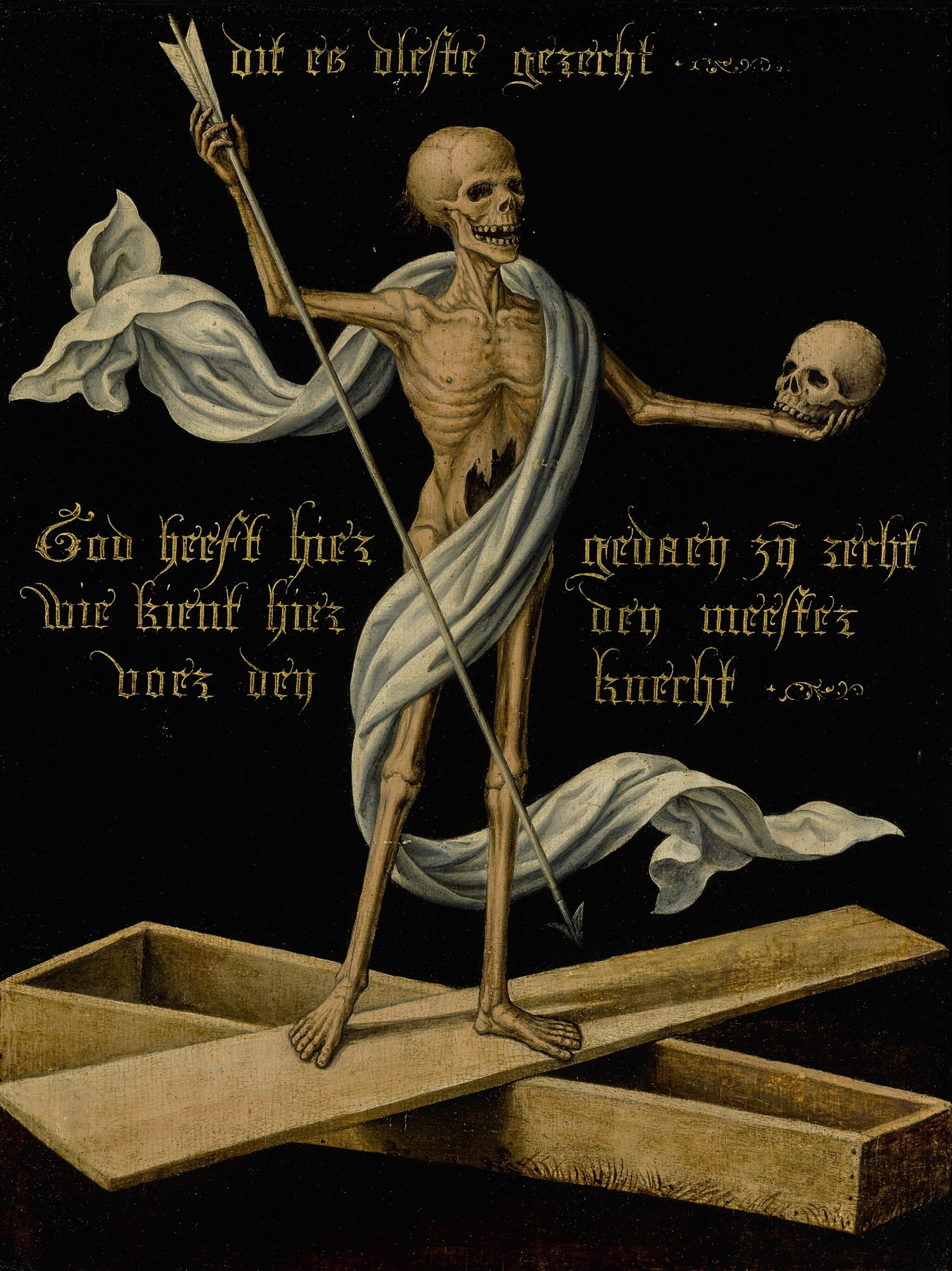 A SKELETON STANDING ON AN OPEN COFFIN HOLDING A SKULL AND AN ARROW, AS AN ALLEGORY OF EARTHLY VANITY AND DIVINE SALVATION

This small panel of a skeleton draped in a billowing white fabric and standing atop a simple wooden coffin is datable to the mid-16th century. Within its simple and balanced composition, great attention has been given to every detail, from the shadows cast on the coffin, to the weight of the arrow and skull in the gaunt figure’s hands, and to the tuft of hair on the back of his head. As a memento mori, the image calls attention to transience of life and the inevitability of death. Yet, the old Netherlandish text that runs throughout provides a moralizing tale, reminding audiences of the last judgement and the possibility of divine salvation.1

Comparisons with other early Northern examples allow for an exploration into the original function of this panel, or into the traditions from which it may have arisen. On the one hand, it may have once been part of a larger allegorical vanitas series. A similar portrayal of an upright skeleton near a gravesite and against a simple dark background appears in one of the six small panels that make up Hans Memling’s allegorical triptych of vanity, conceived around 1485-1490 (fig. 1).2  On the other hand, it may have also been a visual counterpart to a portrait, where it served as the reverse or perhaps a sliding cover. An early example of this tradition is found in an anonymous German Portrait of a Man in a Red Cap in the Art Institute of Chicago.3

That there is a later inscription on the reverse of the panel attributing it to the German master Hans Baldung is not surprising. Like Netherlandish artists, German artists were fascinated with the subject of death, particularly after several plagues swept Europe in the Middle Ages, and they regularly explored the theme. The Dance of Death and the Triumph of Death, in particular, became increasingly popular among these artists, reminding audiences that regardless of one’s position in the world, all are of the same rank at death.

Recent tree-ring analysis by dendrochronologist Ian Tyers suggests that the panel dates from circa 1540 to circa 1572.4

1.  The inscription seems to translate as: This is the Last Judgement / God’s will is hereby done / who here serves the master / will also be served

2.  Oil on panel, 20.2 by 13.1 cm, Musée des Beaux-Arts, Strasbourg, inv. no. 185. This skeleton in Strasbourg is one of six panels that once formed a triptych made of three double sided panels. Each panel has since been cut in half vertically, and the skeleton was formerly backed with the armorials of the Louiani in Bologna. For further discussion of Memling’s triptych, see T. Kren, et al., The Renaissance Nude, exhibition catalogue, Los Angeles 2018, pp. 106-107, cat. no. 32a-f, reproduced.