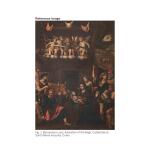 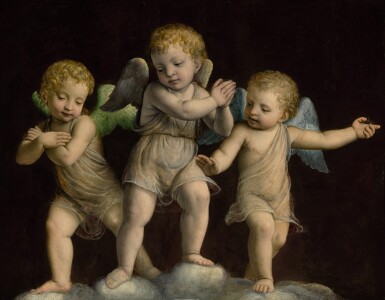 Three graceful putti atop clouds gaze downwards in various poses of adoration in this sophisticated panel by Bernardino Luini, a central figure of the Lombard Renaissance deeply influenced by Raphael and Leonardo. Wearing gauze tunics and each with different colored wings, they look towards a point outside of the picture plane to the lower left, suggesting this composition once served as the upper register of a polyptych. Although a paucity of documentary evidence surrounding Luini’s life makes it difficult to establish a chronology of his works, the restrained color palette of this scene, the skillful rendering of the flesh tones of the figures, and the soft modelling of their lively forms suggests a possible dating of this panel to circa 1515-1520.

Similar young putti atop clouds appear in Luini’s Adoration of the Shepherds of circa 1514 (fig. 1) as well as his Madonna and Child Enthroned with Saints and Cardinal Scarmuccia Trivulzio of 1517,1 both in the Cathedral of Santa Maria Assunta in Como.  Whether or not these examples serve as illustrative benchmarks for the origin of the present composition, its innovative design was successful in its own right, as attested to by the old, faithful copies of it that are known. One 16th century copy on panel with illustrative Italian provenance was offered at auction in London in 1986,2 and another early 17th century copy was sold in 1983 in Paris.3  A version of comparable dimensions and description was in the collection of Sir William Farrer at the end of the nineteenth century.4

This painting will be included as Bernardino Luini in the forthcoming catalogue raisonné on the artist in preparation by Dr. Cristina Quattrini, to whom we are grateful.