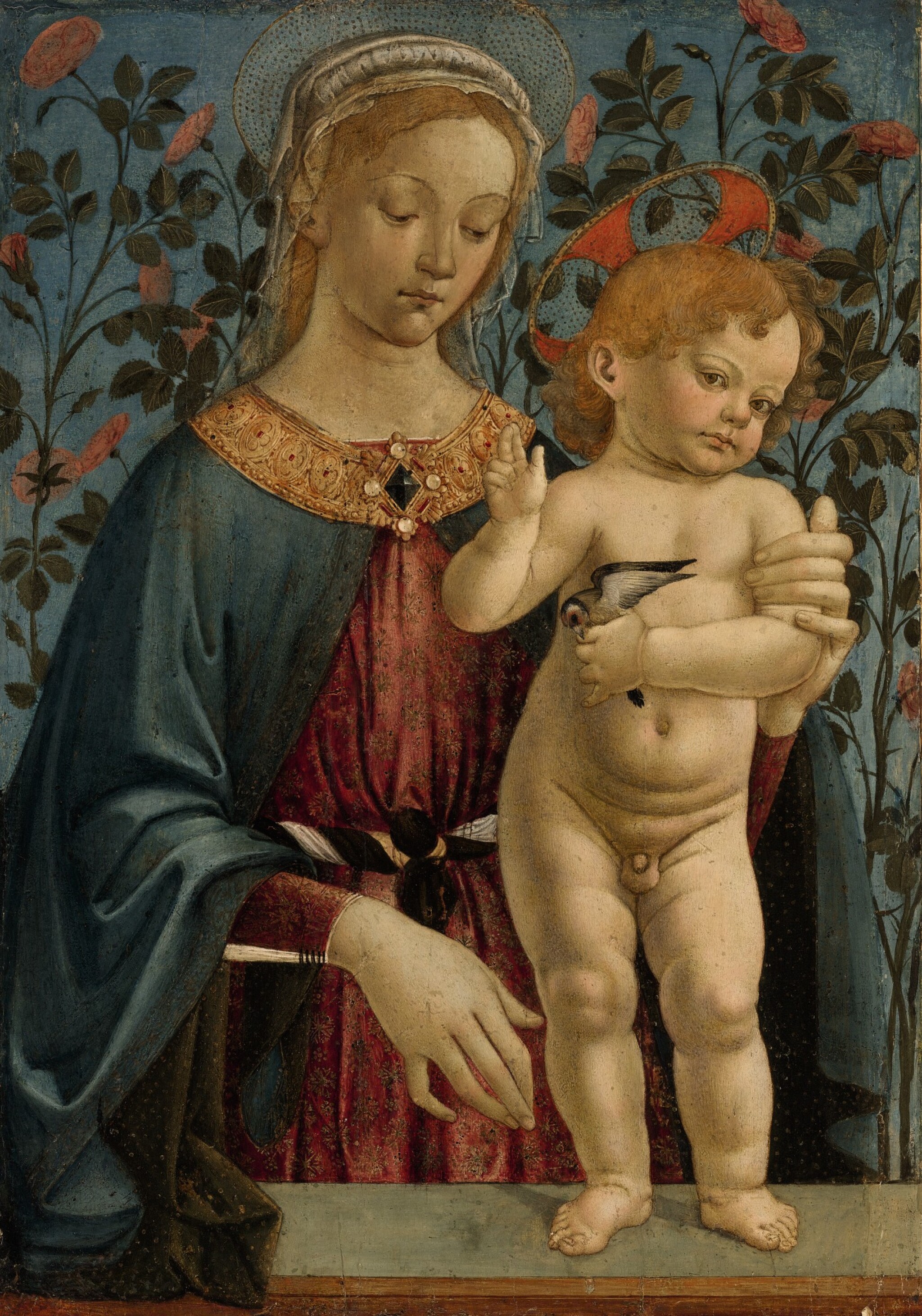 Private Collection, England (according to a Manchester Depository label on the reverse);

In both its composition and sculptural handling, the present Madonna and Child derives from a group of paintings traditionally associated with the workshop of Andrea del Verrocchio. Though known primarily, and rightfully, as the pre-eminent sculptor in Florence during the third quarter of the 15th century, Verrocchio's contributions to the field of painting remain lesser known due to a lack of documented autograph works. What seems more certain is that there was a group of accomplished painters active in Verrocchio's bottega, producing painted variants of their master's designs. In particular, numerous devotional images of the Madonna and Child in half- or three-quarter-length exist, of which this is a recently discovered example.

Verrocchio was registered as a painter ('dipintore') with the artists' guild in 1472, but little quantitative knowledge beyond this fact regarding commissions or extant signed works is available to contemporary scholars. With this lack of comparative material, a reconstruction of Verrocchio's oeuvre is particularly difficult in view of the fact that the three paintings specifically mentioned by the biographer Giorgio Vasari are all problematic from a stylistic point of view.1

Verrocchio's workshop was a center of artistic invention and a major international exhibition (organized by the Palazzo Strozzi, Musei del Bargello, and National Gallery of Art, Washington) over the last year has explored the diverse output of the workshop and the importance of Verrocchio for painting, sculpture, and drawing in Renaissance Italy. Though the paintings from Verrocchio's studio form a cohesive stylistic group, there has been little consensus among scholars about individual paintings' authorship and dating. The overall design of this panel is indebted to Verrocchio and the position of the Christ Child, standing on a ledge in gentle contrapposto, is directly derived from a Verrocchio invention. The clearest such source of inspiration is a marble relief in the Bargello, Florence, itself a work executed in Verrocchio's workshop and taken from a terracotta relief, also in the Bargello.2 Among the painted examples which most directly relate to the present work are those in the Metropolitan Museum of Art, New York (no. 14.40.647); as well as a work sold in London, Sotheby's, July 7, 2010, lot 42.3  These comparable pictures also display the Christ Child as he folds His left arm across His body, with His right hand lifted in prayer.

Despite the fact that this picture features a floral background, a device divergent from the traditional landscape background, such clear compositional similarities suggest a close inter-relation among all these Verrocchio-esque compositions. Another example closely comparable to the present painting is the panel in the Städel, Frankfurt, which has been tentatively attributed to Filippo Lippi's assistant Piermatteo d'Amelia (c.1450-1500).4 As with similar Verrocchio-esque designs, the figures are arranged frontally, thus maintaining the design's monumentality without having to sacrifice any of its sentiment. Furthermore, it is this frontality of the figures that enhances their sculptural qualities (or rilievo); yet another telling stylistic reference to the composition's origins.

In the 19th century this painting belonged to Count Lochis of Bergamo, according to a label on the reverse. At his death in 1859 Count Guglielmo Lochis (1789 - 1859) left his collection - consisting mainly of 15th and 16th century paintings - to the Comune di Bergamo. It was not until seven years later that the collection found its way to the Accademia Carrara in Bergamo, after complex negotiations with the count's heirs. The Lochis bequest forms the core of the Accademia's collection of Quattro- and Cinquecento paintings, including important works by the Bellini, Cosmè Tura, Raphael, Titian, Clouet and Dürer, as well as consisting of a notable group of Bergamasque paintings. This painting, apparently ascribed to Lorenzo di Bicci when in the Lochis collection (according to the reverse of the panel), was not included in the Lochis sale in 1868, thereby suggesting it may have been sold prior to that date.5

1. The Pistoia altarpiece was executed almost entirely by Verrocchio's pupil Lorenzo di Credi; the San Salvi Baptism of Christ was extensively reworked by another pupil, Leonardo da Vinci; and the Madonna and Child with Saints in Budapest, Szépmüvészeti Muzeum, is actually by Biagio d'Antonio.

2. The marble and terracotta reliefs are reproduced in A. Butterfield, The Sculptures of Andrea del Verrocchio, New Haven & London 1997, figs. 110 and 109 respectively. Another terracotta relief, attributed to Francesco di Simone and in the Victoria & Albert Museum, London, demonstrates a variant of the design in which the Madonna and Child are in similar poses, though she is seated and He stands on her lap instead of a cushion. See A. Wright, in Renaissance Florence. The Art of the 1470s, exhibition catalogue, London, National Gallery, 20 October 1999 – 16 January 2000, pp. 182-83, cat. no. 28, reproduced in color.

5. The painting was obviously not among those bequested to the Accademia Carrara and was not included in the sale of eleven paintings held in Paris, Hôtel Drouot, April 3, 1868. The painting is not listed among the 100 works in Cento quadri della Galleria Lochis in Bergamo (1834) nor is it in G. Lochis, La Pinaocteca e la Villa Lochis alla Crocetta di Mozzo presso Bergamo (1858) suggesting the panel may already have been sold.