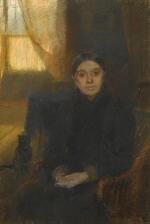 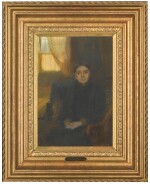 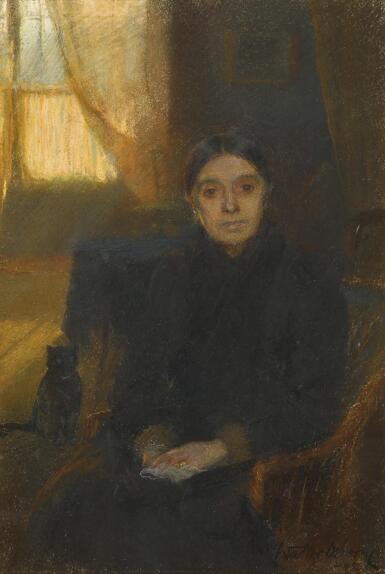 The sheet appears sound and not laid down, cockles slightly. Occasional small artist pin holes to edges, only visible upon close inspection. The work appears in very good overall condition.

Held under glass in a gilt plaster frame; unexamined out of frame.

The present work is a little-known depiction of the artist's model and mistress Henriette (Renée) Honta (1894-1955).

Sixty-seven years old at the time this work was painted, O’Conor’s wealth of experience shines through here in his propensity for concealing the deliberate behind the seemingly casual. The model has been centrally placed and symmetrically posed such that her figure dominates the composition, much as in the artist’s earlier portraits of Breton peasants such as Young Breton Girl of 1903 (Hugh Lane Gallery, Dublin). The 1927 model gazes past us into the distance, the curves of her cheeks, shoulders and arms creating a rhythmic profile that separates her from the workaday surroundings of the studio, complete with stove at the far right, its top lifted to yield added warmth, whilst a rag seems to be drying just above it. The bright blue tones of the model’s blouse reinforce this sense of separation, the pattern in the fabric introducing a diagonal movement that culminates in the sitter’s clasped hands.

The marked dignity of O'Conor’s subject can be explained by fact that her rounded features and bobbed haircut accord closely with those seen in a contemporary photograph of his mistress, Henriette (Renée) Honta (1894-1955). She had modelled, nude as well as clothed, for many of his pictures from 1916 onwards, besides practising as a painter in her own right and becoming a member of the Salon d'Automne. Although they kept separate living quarters in Paris, we know from O’Conor’s correspondence that he was very devoted to her. They married in 1933 and promptly moved to a capacious property in the Loire that was purchased in Renée’s name. She went on to care for him in his old age and, after his death, started the process of organising his studio and researching his early career – a phase of his life he had kept hidden from her.