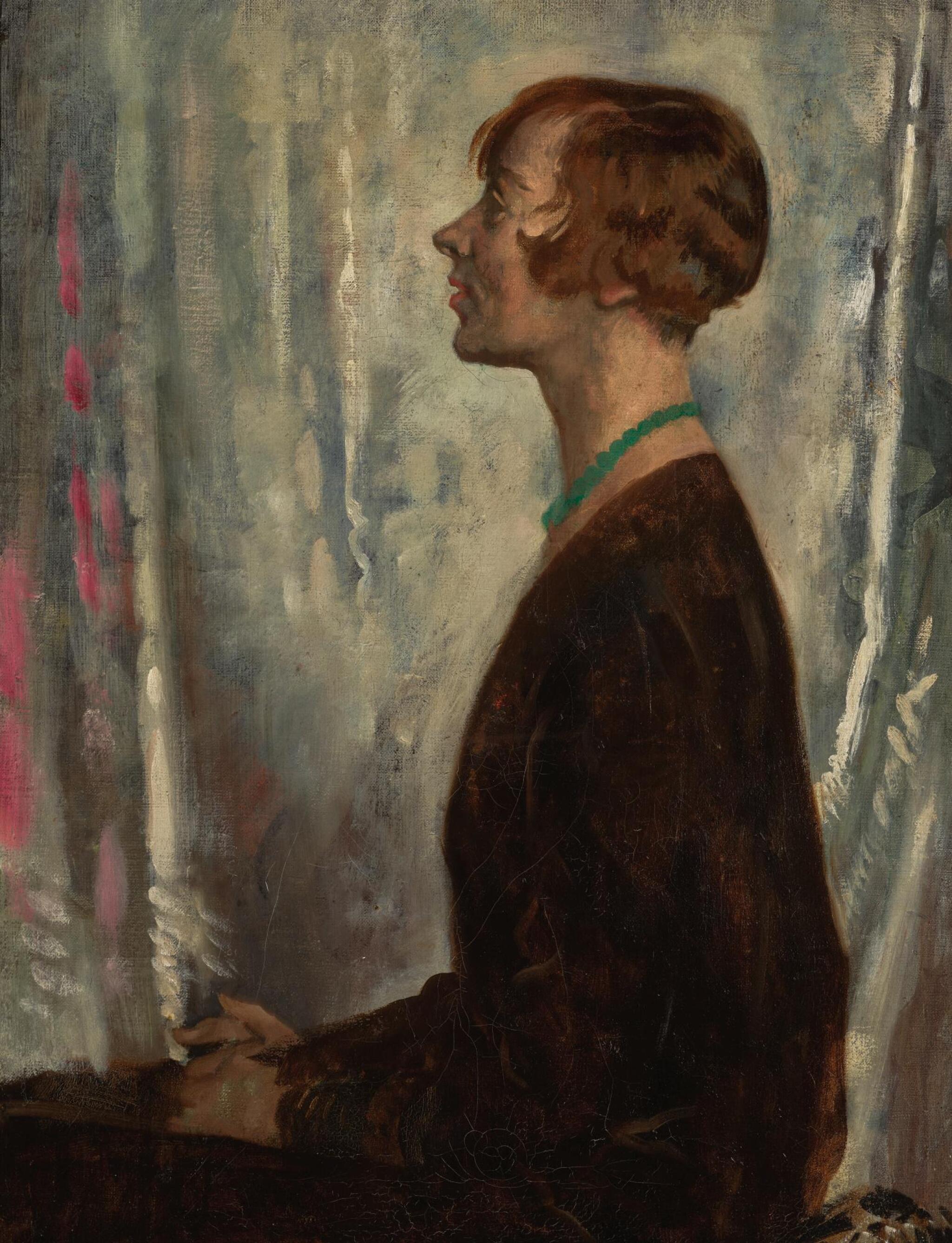 Original canvas. There is a craquelure pattern predominantly visible to lower half of sitter's profile. This appears stable and the work in good condition overall.

Under ultraviolet light, there appears to be an area of retouching in the upper left corner; some to the sitter's neck and a horizontal line approx. 3in. wide across middle of sitter's chest.

Ernestine Marguerite Louise Erskine, known as Margot, was born 14th October 1881 in Edinburgh and became a well-known actress of her day. Her first husband was Richard Murray McGusty whom she married in 1902. They moved to Gosford, Oxfordshire and were dairy farmers. However, the life did not suit Margot who returned to her acting career in London promising to come home every weekend. When she failed to keep that promise, he came to visit her in London where he discovered gifts of flowers and books from Arthur Bendir. He threw the flowers out the window and demanded she return the books. He later discovered she was accompanying Arthur Bendir in his car. He wrote to her: “This stage life must finish. I cannot have my wife going about with men I do not know. Either you must come and live with me or the whole show must end. Do come back and show that you really love your Dickie”. She replied, “I am fond of you but cannot live that sort of life again”.

She divorced Richard in 1908 and continued her acting career until 1921 when she married Bendir, the father of her first child. He was one of the founders of Ladbrokes Betting and a big investor in the original Irish Sweepstakes (now the National Lottery). They honeymooned in Paris and for a wedding present he bought her Medmenham Abbey, of Hell-Fire Club fame, on the banks of the Thames near Marlow. Margot and Arthur were also famous racehorse owners.

The present portrait is one of two versions Orpen made. Both depict her in the same clothes and necklace, seated in half-length pose and facing left, hands resting on her lap; although in the other version Bendir is portrayed with her head turned three quarters towards the viewer, as opposed to being completely in profile. The inspiration for the two portraits may have come from a feature in The Sketch, dated 27th February 1918, where Margot is shown posing in complete profile in one photograph, and three quarter face in a second photograph.

We are grateful to Dominic Lee for his kind assistance with the cataloguing of the present work. Visit sirwilliamorpen.com for further information.