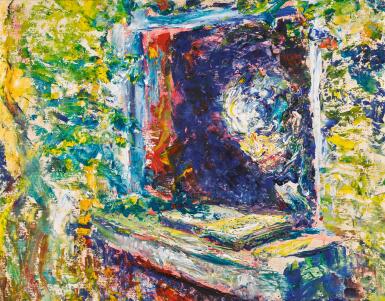 signed l.l.: JACK B YEATS; titled on the reverse

The board appears sound and the work in very good original condition with a rich impastoed surface.

Held in a modern reproduction frame, which would benefit from being replaced. For the exhibition prior to the auction, the work is being shown in a loaned swept, gilt frame.

Please note the work is being exhibited in a gilt plaster frame on loan and will not be sold with the painting.

Waddington Galleries, London, where purchased by by Brian Desmond Hurst in 1956;

Private collection, U.S.A., thence by descent to the present owner

Framed in a window, a man is seen absorbed in a book resting upon a windowsill, its open pages caught in the sunlight. Foliage is suggested in the form and colour of the brushwork by the left-hand edge. In Yeats’ later works his expressive use of colour for its emotive purposes reached new heights and here, as the title suggests, it dazzles in the light. Writing perceptively of Yeats’ use of brushwork and colour, Eamonn O’Malley, friend of the artist, wrote: ‘At times, impatient with the brush to communicate his feeling for the richness and charm of pigment and his sheer joy of its expressive power, he employs the palette knife to give swiftness and vigour to the immediacy of his emotion. Seemingly unrelated colours directed by this urgency create an orchestration due to his unerring taste in colour harmony; and in a form of evocative magic, make a direct impact upon the mind (Introduction to Jack B. Yeats, National Loan Exhibition, Dublin, 1945).

Framing the figure using a window in this manner is a device that recurs in Yeats’ work. As he is absorbed in the book, he himself becomes the central protagonist for us. While a direct interpretation of Yeats’ paintings can prove elusive, a narrative element always remains central. Yeats is a great story-teller and his paintings are stories, rooted in a potent mix of Irish tales, characters and events with Yeats’ personal take on them – more objective in the works of his youth and thereon increasingly subjective.

Aside from painting, Yeats was a gifted writer publishing several books to acclaim. These books give an inner voice to the idiosyncrasies found in his paintings. As H. Pyle commented, ‘The books express Yeats’ personality, his full mind, and imagination overflowing in words. He rose instantly to another plane, conjuring up situations, and the new medium extended his vision, bringing to his painting a more precise literary quality’ (H. Pyle, Jack B. Yeats, A Biography, London, 1970, p.139).

These two qualities of Jack B. Yeats – painter and writer – are symbolically brought together in the present work. It was John Butler Yeats who once observed, ‘some day I shall be remembered as the father of a great poet – and the poet is Jack.’ (letter to A. Harvey, quoted in W. Murphy, Prodigal Father: The Life of John Butler Yeats, 1978, p.209).