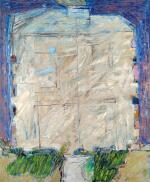 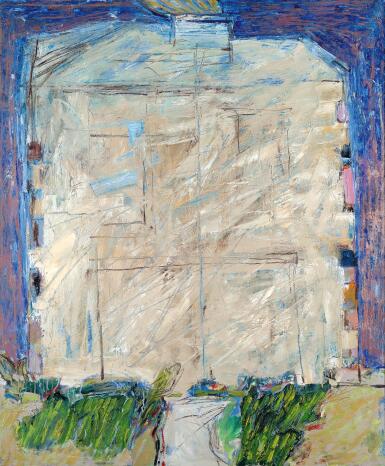 signed and dated 84 on the reverse

Original canvas. Two circular areas of craquelure in upper left quadrant. Another area near lower left edge with some resulting paint loss, and again to lower centre of building and centre right of building. Overall the work appears in good condition with strong passages of impasto.

There appear to be no signs of retouching under ultraviolet light.

On returning home after an illness from Downpatrick Hospital in 1983 Blackshaw recalled, 'I realised that the work that I had been doing was dead for me'. He had danced with Cézanne for over twenty years, created and recreated with great aplomb in water -colour, oil and pencil, dozens of beautiful paintings of fighting cocks, dogs, horses and countless other subjects but for him the great fight was just beginning. The second significant shift in his oeuvre was about to be born.

The irony is that just as he sensed a hint of what he wanted to pursue in his painting, his Antrim studio went up in smoke that very year. That event was seminal to his development but there is no evidence that it overwhelmed him in the conventional sense apart from going grey and losing a lot of his hair. His life's experience had hardened him. He felt that the fire in some sense exorcised him. It let him start afresh. He wanted to get back to doing something that was 'meaningful'. This feeling and desire to find a new way coincided with an observation made by fellow Irish painter Patrick Collins. He argued Blackshaw was 'too close to his subject'. The point was well made because he had already set about dealing with this himself. Before the fire struck Blackshaw had 'made' five paintings of which he said 'I felt I had definitely come through'. Finding himself temporarily without a studio Blackshaw recoursed to executing some charcoal drawings of Joe Bell's house in one of the bedrooms of his home at Rough Lane. From this emerged the present work in oil.

Blackshaw attaches considerable weight to these skeletal paintings of 'council houses'. These houses represented a dramatic shift in the social environment of the late fifties and early sixties of Northern Ireland. Furthermore, the houses amounted to an intrusion into large stretches of unspoilt land for hundreds of years right across Northern Ireland. These were publicly funded houses designed to accommodate and to meet the growing expectations of an ever demanding society in an age of greater awareness and communication. These houses for thousands and thousands of people provided them with running water and inside toilets for the very first time. Their presence on the landscape became a focus for Blackshaw's attention. Despite being a dedicated conservationist, the construction of these dwellings did not blind him to the importance of the people who occupied them. The council houses were receptacles of nostalgia and he was attracted to the characters living in them. The back and front gardens were testament to the types of people who lived in the houses. Those who kept an old dog had their own attraction for Blackshaw, a devoted dog man himself. The houses were more to do with associations, memories and experiences of people like Archie Acheson from near Ballymoney. He was a celebrated dog man. Blackshaw recalled how he rejoiced in Archie's coal-house seeing two boxes and two clipped out fighting cocks in them. This was all to do with the romantic side of life in those houses. In a commentary on many of those paintings from the early eighties and into the middle nineties, art critic Ann Elliott Sherman who reviewed Blackshaw's works hanging in the San José Museum in Montana wrote; 'External form gives way to internal essence in the paintings of Basil Blackshaw'.

She added, 'a draftsman whose 70s canvases can rival Degas in nailing the nuance and ritual of the racetrack, Blackshaw now prefers to strip his subjects past literal representation down to their essence in form, function and idiosyncrasy, to a sense of their place in the world.' Joe Bell's house stands witness to Miss Elliott Sherman's keen observation.