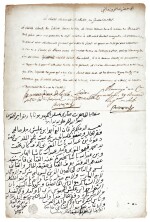 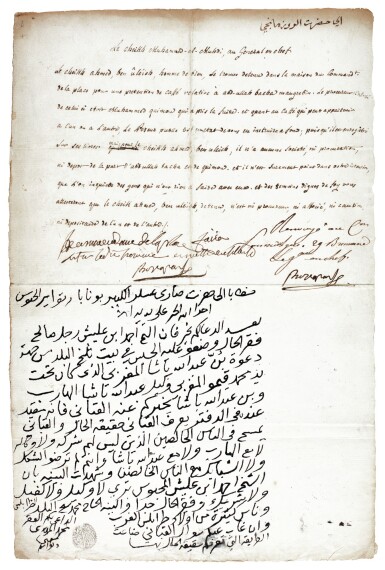 Napoleon I. Manuscript document from the Divan of Cairo, with Napoleon's autograph response, 1798

Napoleon I. Manuscript document from the Divan of Cairo, with Napoleon's autograph response, 1798

Manuscript document in French and Arabic, from Sheikh Mohammad al-Mahdi, inscribed by Napoleon with his autograph response, signed twice ("Bonaparte"), [1798]

the original petition from Muhammad al-Mahdi, on behalf of the Divan, is written on the lower half of the page (with the stamp of the Divan at the bottom), in which he declares that, whoever might be the owner of the "caffé" in question, Sheik Ahmed himself ("homme de bien") has never had any contact with Abdullah Bacha, and that he feels sure that Napoleon (as "Général-en-chef") would not want to create dissension amongst people who have nothing to do with the matter, the contemporary French translation and Napoleon's two-line autograph reply written above the Arab text, having forwarded the complaint from the Divan to Citoyen Poussielgue, on 29 Brumaire (signed by Napoleon)

Whilst documents signed by Napoleon are not uncommon, this manuscript contains an executive order in his hand, signed twice. It is also notable for the presence of the substantial letter from Mohammad al-Mahdi in Arabic, to which he is responding, complete with the stamp of the Divan at the foot of the page. Napoleon I. Manuscript document from the Divan of Cairo, with Napoleon's autograph response, 1798
Lot Closed
Lot 32