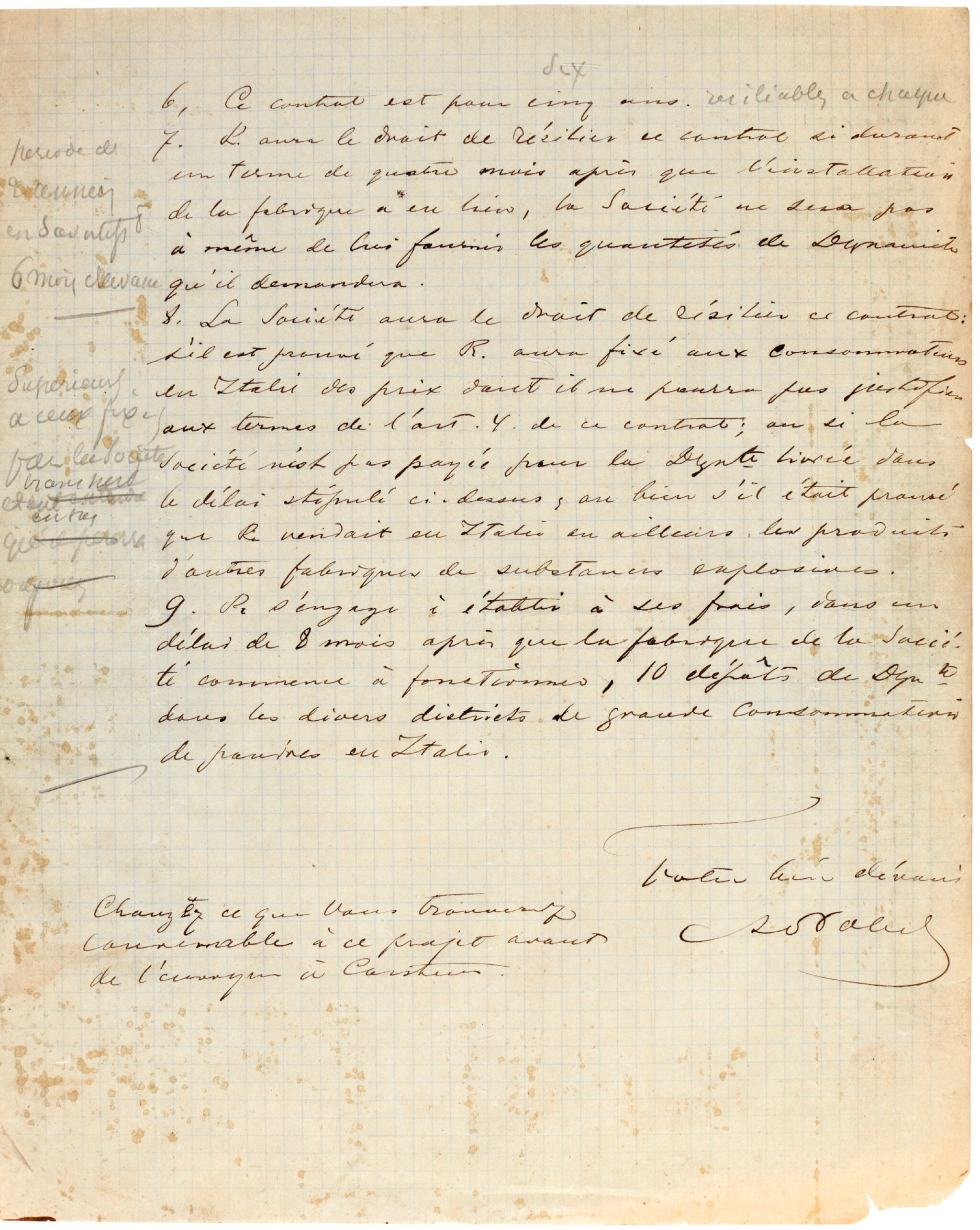 Collection of autograph letters, drawings of machinery and buildings, plans and documents regarding Nobel's establishment of a dynamite factory in Italy, c.1872-1873

1) Autograph letter signed (“ANobel”), in French, to [Paul] Barbe, in which Nobel gives his detailed requirements for establishing the Italian Factory to produce dynamite at Avigliana (near Turin), under the aegis of his agent of Casimir Robaudi ("Voici le petit devis pour la Fabrique Italienne et le projet de contrat avec Robaudi"), laying out all his requirements, with their immediate and defrayable costs, in a detailed table, envisaging the quick production and sale of the dynamite, financed by three months’ credit, and outlining the terms of the contract under which the business at Avigliana should operate; Nobel’s specifications include the measurements of the brick buildings, power of the traction engines, nitrite grinders, and other machinery, a building to house nitric acid, an ice room, various other buildings in wood, for the production and washing of glycerine and dynamite, and for packing the dynamite, cartridge making, water heaters, and enclosures; he outlines nine paragraphs for a five-year contract with Robaudi, named as agent for the Italian business and responsible for the costs of selling the dynamite sent to him, for which he can set a price above market rates, provided that the company can cancel the contract if Robaudi’s consumption and marketing contravenes their policies, or if the company does not receive payment for the dynamite, advising Barbe to revise the contract as he sees fit before sending it to Carstens, the merchant in Hamburg, 3 pages, 4to (c.26.5 x 21cm), on thin ruled paper, with annotations in pencil, one marking the extension of the contract to six years, Paris, 6 September 1872, some staining, minor tears to edges

6) Manuscript memorandum in French signed by Amedeo Hoffer, the Director of the factory at Avigliana, recording the payments to all the workers employed, 2 pages, 4to, no date;  together with other financial memoranda, 2 pages, 8vo, 21 February 1873 -- 7) Italian manuscript of the “Regolamento dei transporti delle Materie infiammabili ed esplodenti” approved by the administrators Bolmira and Guglianetti 12 pages, 4to, 9 April 1872, with a printed English translation--8) Seven manuscript technical and legal documents, one regarding Nobel’s patent, annotated in blue crayon, 22 pages, 4to, Milan, 4 May 1872

This collection contains one of the longest and most important letters by Alfred Nobel (1833-1896) to appear at auction, giving detailed instructions for the establishment of a dynamite factory near Turin in 1872-1873. The collection is illustrated with ink and pencil sketches of the buildings, together with documents about the establishment of the company there. At the end of December 1871, Alfred Nobel obtained from the Italian government a six-year patent for the exploitation of dynamite, to be financed by both French and German investors. In April 1872, Nobel reached an agreement with five Parisian financiers (and engineers) to found a public limited company. Among the shareholders mentioned here were Francesco Barbe, Amedeo Hoffer (director of the factory), Casimir Robaudi (agent for the Nobel company in Hamburg), Antonio Campagna (formerly mayor of Avigliana), the Hamburg merchants Carl Ferdinand Carstens and Edouard Bandmann, and the Parisian banker Gunzbourg. They acquired land near Avigliana, some thirty kilometres west of Turin, and set up a factory through a commissionaire, Robaudi, obtaining a patent for the manufacture of dynamite. Documents relating to this are also included in this collection. The company established by Nobel continued production until being destroyed during the Second World War; it became the site of the paint factory DUCO, where Primo Levi worked for many years, writing Se questo è un uomo in 1946.