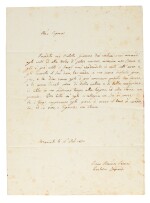 G. Leopardi. Unpublished letter, dictated to his sister Paolina, and six by his brother Pierfrancesco, 1830-1847

G. Leopardi. Unpublished letter, dictated to his sister Paolina, and six by his brother Pierfrancesco, 1830-1847

Unpublished letter written on Leopardi's behalf by his sister Paolina, signed by her, to the poet Zefirino Re, together with six by his brother Pierfrancesco, 1830-1847

in which Paolina explains that, given Giacomo's continuing problems with his eyesight and headaches, he has entrusted her with acknowledging Zefirino Re's gift of a book, assuring him that the work was already known to him and that he considers it full of good criticism and erudition, both from a linguistic and an historical point of view, and that he hopes to renew their acquaintance when his circumstances change for the better ("...Impedito mio Fratello Giacomo dai continui suoi incomodi agli occhi ed alla testa di poter scrivere, incarica me (come egli è già solito di fare), acciò...le dica come egli di già conosceva questo suo lavoro, e lo aveva trovato pieno di bella critica e di bella erudizione ed utile in un medesimo tempo alla lingua ed alla storia nazionale..."), 1 page, 8vo (22 x 16cm), integral address leaf ("Al Chiarissimo Signore...Zeffirino Re Cancelliere del Governo [in] Filottrano"), postmarked, remains of red seal, Recanati, 16 February 1830--together with six letters signed by their brother Pierfrancesco ("Pietro Leopardi" or "Pierfrancesco Leopardi"), to the historian Raffaele De Minicis in Fermo, reporting the decline and death of his father Monaldo and discussing the publication of a nearly-completed work by him, 12 pages, 8vo, autograph address-panels, Recanati, 9 April 1846 to 27 July 1847

Leopardi suffered from ill-health all his adult life and in 1828 had returned to be cared for by his family in Recanati; he was very unhappy there, but composed some of his best-loved poems during his confinement: Le ricordanze and Canto notturno di un pastore errante dell'Asia. Paolina (1800-1869) was herself a fine writer and translator, including a study of Mozart (published in 2010). Their rather stern father Count Mondalo Leopardi, who died in Recanati on 30 April 1847, also published many books.