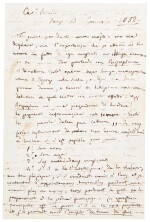 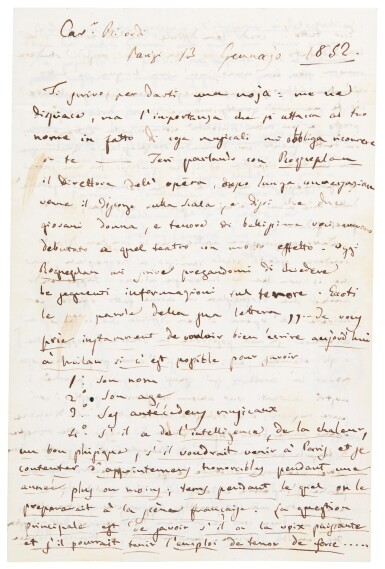 G. Verdi. Unpublished autograph letter to Giovanni Ricordi, about performances of his operas in Paris, 1852

G. Verdi. Unpublished autograph letter to Giovanni Ricordi, about performances of his operas in Paris, 1852

Fine unpublished autograph letter signed ("GVerdi"), to his publisher Giovanni Ricordi, about performances of his operas in Paris, 13 January 1852

in which Verdi transcribes part of a request (in French) from the impresario of the Paris Opéra, Nestor Roqueplan, to provide information about a young tenor that had recently made a successful debut at La Scala, urging his publisher for an answer he can forward, since Roqueplan has been accommodating to him in Paris, and goes on to explain that he himself has no interest in having his operas staged there and would not accept an offer from Roqueplan, since French standards do not match those he can achieve in Italy, Italian singers and choruses being superior and the orchestras too, at least when under his direction as with Luisa Miller in Naples and Rigoletto in Venice; Verdi declares frankly that, if he were able, he would prevent the Théâtre-Italien from staging any of his works unless major reforms were implemented, because the whole set-up there is terrible, criticising in particular the choruses and conducting in Bellini's Norma and La sonnambula, and Donizetti's Maria di Rohan (he has yet to hear his own Ernani, but expects it to be even worse), confirming an earlier refusal to go to Parma and his request for Ricordi to answer Roqueplan's enquiry confidentially ("...Ho sentito Norma, Sonnambula, e Maria Rohan. Credimi in tutta coscienza, l'insieme è detestabile. Non ho sentito Ernani ma credo sarà ancor peggio s’è possibile. Il pubblico ha ragion, non si può gustare la musica eseguita in quel modo. Per me dichiaro francamente che se io potessi impedirei l’esecuzione di qualunque mia opera fino a che non si fossero fatte tutte le riforme necessarie...")

This is an important declaration of Verdi's aversion to contemporary performance practices in Paris, which he describes as "detestable". Verdi particularly wanted to prevent Luisa Miller being staged at the Théâtre-Italien and wrote to Ricordi on 20 January expressing his objections. He was even more incensed by the publisher's intention of having the opera translated into French, a dispute which went on to cloud Verdi's relationship with Ricordi's even after Giovanni's death in 1853. Despite Verdi's assertion that he would not accept any offer from Roqueplan, he was in fact in Paris for exactly that purpose, ie to negotiate with the Paris Opéra, and whilst there signed the contract that led to Les vêpres siciliennes, staged in 1855.