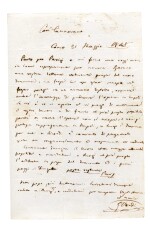 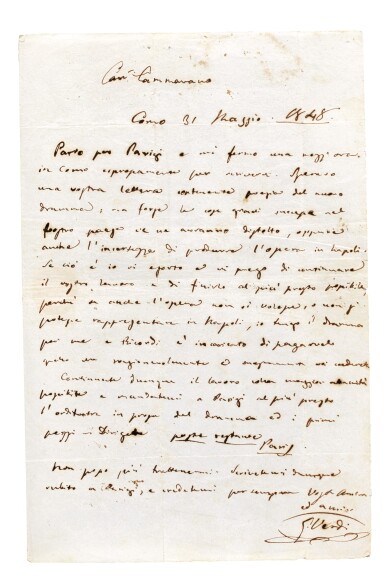 expressing disappointment at not receiving any of the libretto for their forthcoming opera [La battaglia di Legnano], enquiring if this is due to the serious events in Naples (the Bourbon suppression of the provisional parliament) or to his uncertainty about staging the opera there, assuring him that, in case it cannot be given, he will keep the libretto for his future use in any case and has arranged for Ricordi to pay him whatever he considers appropriate for his work, exhorting him to continue writing the libretto with as much speed as possible, and to send the prose draft of it to him in Paris (...Parto per Parigi e mi fermo una mezz'ora in Como espressamente per scrivervi. Speravo una vostra lettera continente poesie del nuovo dramma; ma forse le cose gravi successe nel vostro paese ve ne avranno distolto, oppure anche l’incertezza di produrre l’opera in Napoli…. ...")

Salvadore Cammarano (1801-1852) was the official poet and stage director of the Teatro San Carlo, Naples, and Verdi negotiated with the opera house largely through him. After many delays, including threats not to compose the opera at all, Verdi finally staged La battaglia di Legnano at the Teatro Argentina, Rome, on 27 January 1849. This letter is related to thirty-six unknown letters from Verdi to Cammarano, now in the Biblioteca Palatina, Parma, which were acquired by the Ministero de' beni culturali, Rome, at Sotheby's sale, 26 October 2017, lot 138.