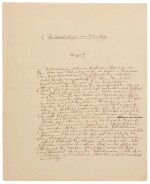 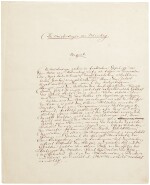 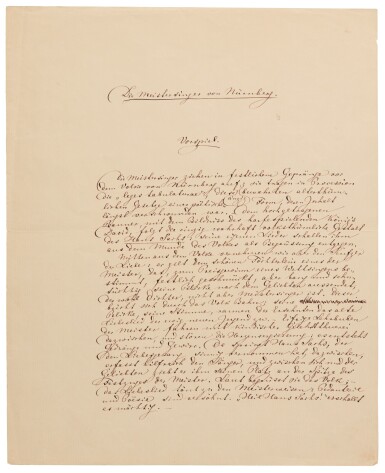 describing the procession of the Mastersingers, with their banners and proudly displayed leges tabulaturae, Hans Sachs, whose own songs are sung back to him in greeting by the people of Nuremberg, the two lovers (not mentioned by name), one the beautiful daughter of a Mastersinger, the other a young poet whispering his love-song, and the scurrying apprentices, disturbing the romantic outpourings and causing tumult and confusion, and detailing the intervention of Sachs, who places himself supportingly between the two lovers and gives the young man his place at the head of the procession; finally, the famous climactic superimposition of musical themes is also alluded to by Wagner, where 'pedantry' and 'poetry' are united, to the cries of "Heil Hans Sachs"

THIS IS WAGNER'S DESCRIPTION OF THE "PROGRAMME" BEHIND ONE OF HIS BEST-LOVED ORCHESTRAL SCORES. It is historically important for the composer's wish to "explain" the meaning of a concert piece in advance of his completion of the opera.

This attractive manuscript was written by Wagner as a programme note for a performance of the overture to Die Meistersinger at a concert conducted by Wagner in the private chapel of Prince Constantine of Hohenzollern-Hechingenin at Löwenberg, Silesia (now Lwówek Śląski in Poland), on 2 December 1863. This concert was one of a number given by Wagner in the course of a somewhat disappointing fund-raising tour during the early winter of 1863-1864. Although Wagner had completed the text of the opera by 1862, the composition of the score was not finally completed until 1868, in which year the opera was first performed. Wagner's programme note provides a lively elucidation of the overture, which has remained one of his most popular scores, in or out of the opera house.