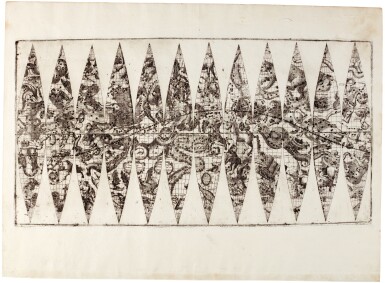 A GOOD SET of celestial and terrestrial gore sheets for the 150mm. (6 inch) diameter Coronelli globes.

"Two sets of [terrestrial] gores were reprinted in Coronelli's Corso Geografico of 1693. The first of these sets, representing a globe 15 centimetres in diameter is undated but is believed to have been engraved in 1692. The gores are reduced in all essentials from Coronelli's much larger globe gores of 1688 and likewise carry the tracks of Alexander Chaumont's voyage from Brest to Siam, and of Le Maire's passage across the Pacific in 1616" (Shirley).

Shirley, The Mapping of the World 556