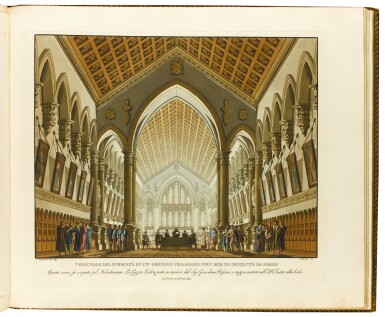 Alessandro Sanquirico (1777-1849) was the chief designer and scene-painter at La Scala during this most important period in its history. His sets are notable for the introduction of exotic locations and architecture, and include spectacular scenes set in Egypt (Memphis, the Pyramids and Damietta), Babylon, Ancient Greece, Crete, Mecca, the Ottoman Empire (including Tarsus), and Persia.  The operas illustrated include Mozart's La clemenza di Tito (1819), Rossini's La gazza ladra (the 1817 premiere), Ciro in Babilonia (1812) and Semiramide (1824), and Meyerbeer's Il crociato in Egitto (1826). This is the earliest set of Sanquirico's magnificent coloured lithographs that we have seen. The plates show not just set designs, but also the stage action for important productions up to and including the 1827 season, capped by seven for L'ultimo giorno di Pompei, depicting the eruption of Vesuvius. This early issue does not contain five scenes added later (one for Bellini's Norma in 1832) and three ballets. In other copies those plates are printed on paper dated 1830.