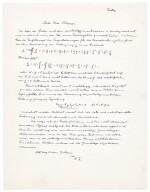 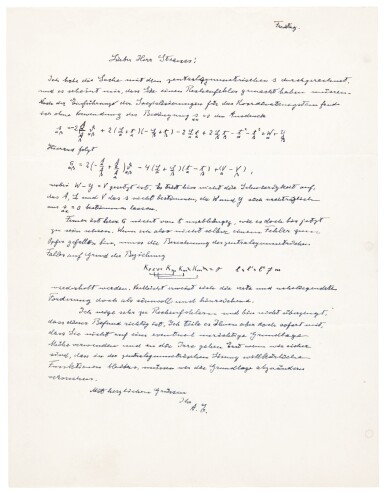 observing that Straus must have made a mistake in his central symmetry calculations, illustrating his point by means of three equations, noting with typical modesty that he himself is very prone to errors of calculation and that he is not convinced that his findings are correct, explaining that he is informing him straight away so that he doesn't labour away on what might prove to be incorrect foundations

Einstein's correspondent was the German-American mathematician Ernst Gabor Straus (1922-1948) who, for four years, between 1944 and 1948, was Einstein's assistant at the Institute for Advanced Study, Princeton, afterwards moving to UCLA where he remained for the rest of his life. In 1948 Straus was awarded a doctorate at Columbia University on the subject of Einstein's unified field theory. His publication 'Some Results in Einstein's Unified Field Theory', of 1949, was based on his thesis.

We are pleased to acknowledge the kind assistance of Professor Gary Gibbons in our cataloguing of this lot. Please see the bibliography for this lot on sothebys.com.