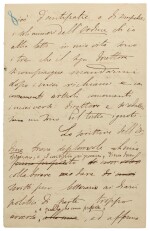 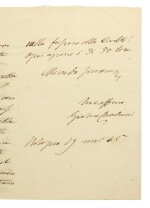 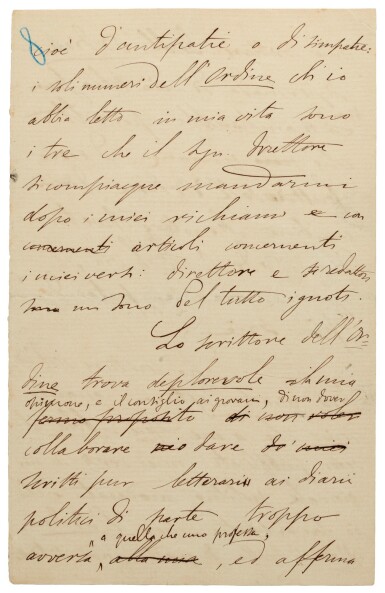 Autograph working manuscript of his essay on copyright, specifically his rights as an author to decide whether to publish a particular poem, unsigned [1881], and four autograph letters signed, [1860s]

being an account of his dispute with Giacomo Vettori, the editor of the journal Ordine, which had published a hitherto unpublished poem of his without permission (or even letting him know), asserting his right to decide whether to make a poem public or not and, where he does, to control when and where it should appear, pointing out that Ordine's publication is more egregious than a pirate edition, since it has taken out of the author's hands the decision whether the poem is ready or worthy of publication in the first place, dismissing as irrelevant Vettori's defence that he should be honoured by the publication of his ode, rather than expecting any payment, and that his complaints are bizarre, ungrateful and motivated by political antipathy towards Ordine; Carducci includes within the text two letters he had written privately to Vettori, who had published sarcastic replies in his editorials, the manuscript written in brown ink with autograph deletions, additions and revisions, marked up by the editor in ink and crayon, with a few page numbers and instructions for the printer ("Lasciare un leggero spazio", "corsivo", etc)

This is an important statement of artistic principle by the leading Italian poet of his generation, an era when literary works were still not protected by copyright. Carducci's essay 'Per l'ordine e contro l'Ordine' was published in the Cronaca bizantina of Rome in two parts, in August 1881 and January 1882. This is the second part, which contains Carducci's central arguments about intellectual property rights, the first part merely describing the background to the dispute. This manuscript does not contain the phrase "ristampato più sopra" on page 21, indicating that it was probably prepared for the first edition, later reprinted in Confessioni e battaglie (1882), 60-68, under "Schermaglie di letteratura, e fors' anche di proprietà d'onestà e di decenza". See also A. Brambilla, 'Nuovi recuperi carducciani' in Aevum, volume 64 (1990), 483-488,

Carducci (1835-1907) had included an early version of 'Saluto d'autunno', without a title, in private correspondence with a lady. A friend of hers (but not of Carducci's), took it to Ordine, a political review in Ancona, whose editor promptly published it without contacting the author. Carducci wrote two letters to the editor (the originals are in the Bibliotheca Queriniana, Brescia), which are transcribed within his essay. The ode, 'Saluto d'autunno', was finally published by Zanichelli in 1889, in Terze Odi Barbare.