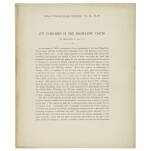 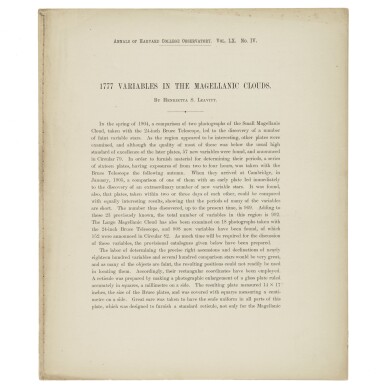 LEAVITT, HENRIETTA SWAN | 1777 VARIABLES IN THE MAGELLANIC CLOUDS. FIRST AND ONLY EDITION.

LEAVITT, HENRIETTA SWAN | 1777 VARIABLES IN THE MAGELLANIC CLOUDS. FIRST AND ONLY EDITION.

FIRST AND ONLY EDITION, the discovery of LEAVITT’S LAW — for which, in Hubble’s view, the author deserved a Nobel Prize. (So did he.) In fact the Prize committee considered Leavitt in 1925, only to learn that she had died. "Leavitt's Law", is the period-luminosity relationship for the Cepheids; this discovery allowed scientists to compute the distances to galaxies which were too far away for the use of stellar parallax observations. Leavitt worked as a "computer" at Harvard, and was one of a number of women who studied photographic plates of stars. During the course of these studies, she noticed that some stars displayed a consistency of brightness despite their location, which made them excellent marker points for measuring astronomical distances. This discovery paved the way for new, groundbreaking work to be made in the field of astronomy, including Edwin Hubble's realization that the universe is expanding.