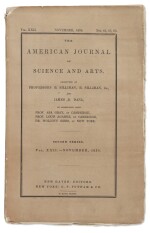 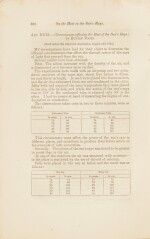 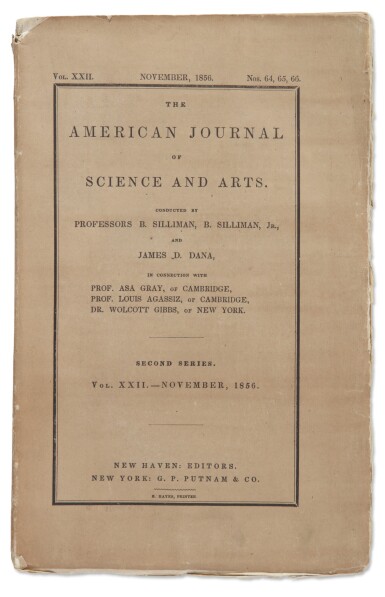 FIRST PRINTING OF THE TRUE FIRST DISCOVERY OF "GREENHOUSE GASES," AND ESPECIALLY THAT CARBON DIOXIDE ("CARBONIC ACID GAS") IS THE WORST OF THEM, PREDICTING EXPLICITLY THAT "AN ATMOSPHERE OF THAT GAS WOULD GIVE TO OUR EARTH A HIGH TEMPERATURE."

Yet again, a brilliant woman's work goes uncredited; the present paper was read aloud for Foote (not by her) before the American Association on August 23rd, 1856, and yet, the credit for the discovery of Greenhouse gases has been given to Svante Arrhenius, who did not write about the Greenhouse effect until 1896, a full FORTY years after Foote's announcement. Arrhenius would go on to be awarded the 1903 Nobel prize in chemistry, and made director of the Nobel Institute in 1905. Foote's prescient paper is now the focus of a forthcoming exhibition "From Eunice Foote to UCSB: A story of women, science, and climate change," University of California, Santa Barbara, October 2019-June 2020.