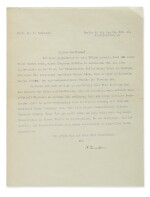 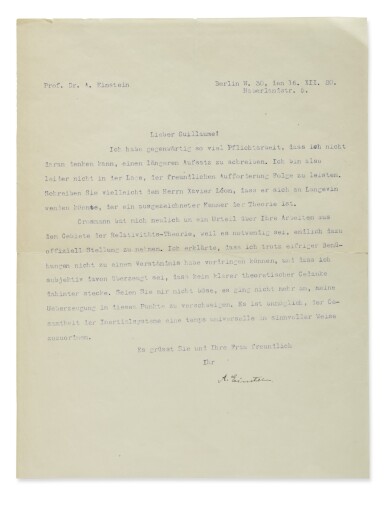 1 page, signed "A. Einstein," in German, crease where previously folded. With the original typed envelope.

FEUDING OVER THE THEORY OF RELATIVITY.

One of Einstein’s final letters to Charles Edouard Guillaume, who in 1913 publicly began a long-running feud with Einstein’s Theory of Relativity (both Special and General) – Guillaume announcing publicly that “I will destroy relativity!” Guillaume published multiple articles “in which he argued for a Lorentzian electrodynamics that retained the concept of a universal time.” Though Einstein initially disregarded Guillaume’s attacks, he responded to them in 1917, launching several years of correspondence. Einstein here definitively states that “there is no clear theoretical idea” behind Guillaume’s position; and because it is precisely the Newtonian notion of a universal time that Einstein’s Relativity demolishes, Einstein here firmly concludes: “It is impossible to assign, in any meaningful way, a universal time to the totality of inertial systems.”

Guillaume was a Swiss-born physicist. He and Einstein knew each other from the patent office in Bern, where both worked as patent examiners. Rather ironically, Guillaume received the Nobel Prize in Physics in 1920 – one year before Einstein, “in recognition of the service he had rendered to precision measurements in physics his discovery of anomalies in nickel steel alloys.” Though not the only critic of the theory of Relativity, Guillaume was perhaps the most vocal and public.

A FINE LETTER AFFIRMING THE CENTRAL TENET OF RELATIVITY.