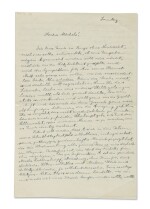 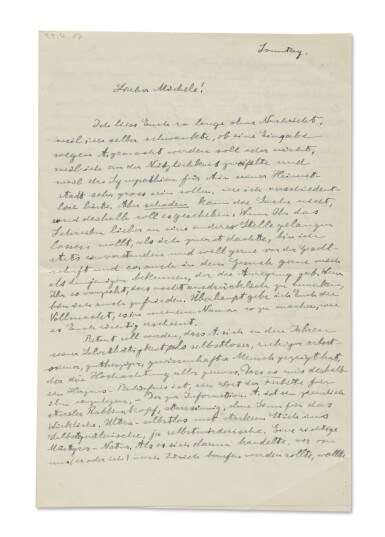 EINSTEIN, ALBERT | ALS TO MICHELLE BESSO, MENTIONING ONE OF HIS LESSER KNOWN BUT BRILLIANT DISCOVERIES, AND AUTHORIZING BESSO TO USE HIS NAME TO APPEAL FOR CLEMENCY FOR FRIEDRICH ADLER FROM THE DEATH PENALTY, 3 PP, 29 APRIL, 1917.

EINSTEIN, ALBERT | ALS TO MICHELLE BESSO, MENTIONING ONE OF HIS LESSER KNOWN BUT BRILLIANT DISCOVERIES, AND AUTHORIZING BESSO TO USE HIS NAME TO APPEAL FOR CLEMENCY FOR FRIEDRICH ADLER FROM THE DEATH PENALTY, 3 PP, 29 APRIL, 1917.

A REMARKABLE LETTER FROM EINSTEIN TO HIS DEAR FRIEND AND SCIENTIFIC COLLABORATOR MICHELE BESSO, MENTIONING ONE OF HIS LESSER KNOWN BUT BRILLIANT DISCOVERIES, CALLING IT "A LITTLE THING", AND AUTHORIZING BESSO TO USE HIS NAME TO ATTEMPT TO APPEAL FOR CLEMENCY ON BEHALF OF THEIR FRIEND FRIEDRICH ADLER FROM THE DEATH PENALTY.

Dr. Friedrich Adler studied physics and mathematics at ETH Zurich, where he became close friends with Einstein, before changing directions to become a journalist and politician. In 1916, as part of his fight against the war policy of Austria-Hungary, Adler assassinated the Austrian minister-president Karl von Stürgkh, for which he was sentenced to the death penalty. Here, Einstein, after much deliberation, authorizes Besso to use his name and influence to plead for Adler's life:

"[Trans:] It must be stressed that during his teaching years A[dler] proved himself a selfless, calm, hard-working, goodhearted, conscientious man, who was highly esteemed by everybody, and that it is my heartfelt desire, therefore, to intercede for him. —Just for your information, A[dler] is a rather sterile, rabbinical mind, obstinate, without the sense of the real. Ultra-selfless, with a strong tinge of the self-torture, even suicide. A real martyr-type." Adler's death sentence was eventually commuted to 18 months in prison, largely in part to pleas for leniency from supporters such as Einstein.

While the present letter is quite famous for its content relating to Adler, it is perhaps more important for its content relating to what has been referred to as Einstein's "unknown insight." "[trans]: Yesterday I presented a little thing about the Sommerfeld-Epstein formulation of quantum theory before the thinned ranks of our Physical Society. I want to write it up in a few days. L[evi] Civita wrote a critical paper on gen[eral] rel[ativity]. I think, however, that he is wrong...". Einstein would indeed go on to "write it up" and presented the resulting paper at the 11 May 1917 meeting of the German Physical Society. This paper was, as Douglas Stone writes, "the only research paper of his career that was written on the quantization of energy for mechanical systems. The paper contained an elegant re-formulation of the Bohr-Sommerfeld quantization rules of the old quantum theory....[and] offered a brilliant insight into the limitations of the old quantum theory when applied to a mechanical system that is nonintegrable..." Both Louis de Broglie and Erwin Schödinger cite this paper in their most famous papers, but the importance of Einstein's "unknown insight" was not fully understood until the 1970s. A wonderful reminder that even what constituted a "little thing" for Einstein was in fact a monumental achievement.

Douglas Stone, "Einstein's Unknown Insight and the Problem of Quantizing Chaos", pp 37-43 In: Physics Today, August 2005; Douglas Stone, Einstein and the Quantum: The Quest of the Valiant Swabian, p 201; The Collected Papers of Albert Einstein, Volume 8, Part A: The Berlin Years: Correspondence 1914-1917, document 331