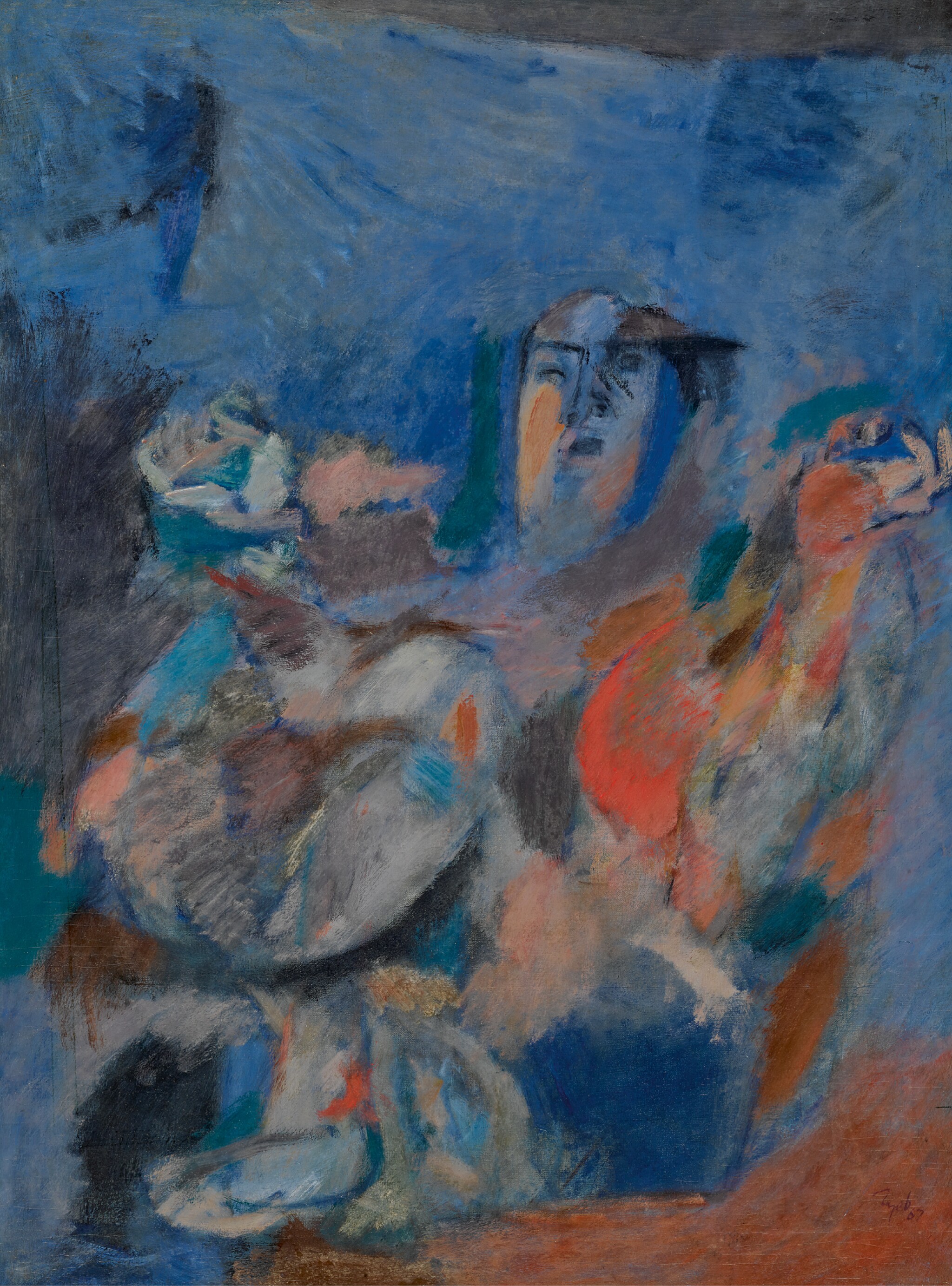 Tyeb Mehta’s Sitting Figure painted in the year of 1967 is from a crucial period of transition in his oeuvre. In 1959, Mehta left India for England where he lived for five years. His paintings from this period were influenced by European expressionism and were executed in sombre colours applied with a palette knife. On his return to India in 1964, his works underwent a considerable change; the gloomy palette and textured surfaces were replaced by flatter planes of colour in richer hues. The current work painted in 1967 is a rare example of this transitional phase between the isolated figures of his early works and the dismembered figures that begin to appear in the 'Diagonal' Series of the early 1970s. In 1968, Mehta went to New York on a prestigious Rockefeller Fellowship, which changed his style forever. Sitting Figure is thus probably one of the last paintings representing the culmination of his earlier period.

Mehta, like many artists of his generation had been witness to the tragic events that took place in India during and after Partition and his memories of this period had an immense impact on him and the vocabulary of his art. Growing up in the Muslim area of Bombay as a member of the Dawoodi Bohra minority, Mehta empathised with the marginalised. The Muslims who had chosen to stay in India after Partition were caught between two worlds, they were regarded as traitors by the new Islamic homeland of Pakistan and 'unreliable resident aliens by Hindu majoritarian forces in India' (R. Hoskote, Tyeb Mehta: Ideas Images Exchanges, Vadehra Art Gallery, New Delhi, 2005, p. 8).  Mehta’s art is a contemplation of suffering and shows an empathy with human anguish. 'There are chiefly two kinds of figures in Tyeb’s iconography: one kind is born of terror, and encompasses his victim types; the other kind is born of kindred hope and awe, and these are his ambiguous divine / demoniac figures.' (ibid., p.16) In this current painting, we see the first type as per Ranjit Hoskote’s classification.

The artist has spoken of some of his experiences, "There were elements of violence in my childhood... One incident left a deep impression on me. At the time of Partition I was living in Mohemmadali Road, which was virtually a Muslim ghetto. I remember a young man being slaughtered in the street below my window. The crowd beat him to death, smashed his head with stones. I was sick with fever for days afterwards and the image still haunts me today. That violence gave me the clue about the emotion I want to paint. That violence has stuck in my mind." (ibid.) His art is thus a contemplation of suffering and shows an empathy with human anguish.

Characteristically of Mehta, the focus here is on a single figure. In an interview in 1997, he reflected, “I find the minute, the second image comes into the picture it becomes a narrative… I have done it in a few paintings here and there, but by and large I am not interested in that area…” (T. Mehta in conversation with N. Tuli, The Flamed Mosaic: Indian Contemporary Painting, Grantha Corp, Bombay, 1997, pp. 332-333) The limbs of the figure are dislocated, the face has displaced features in the eye, nose and mouth, the hands flexed – it appears as if the figure has gone through an act of ritual dismemberment. Despite the distortion of limbs and the inherent violence of the imagery, the potency of Tyeb's work lies in the balance of harmonious tones and lines within a deceptively simple composition.

‘Through the 1950s and 1960s, Tyeb practiced a harsh, brushy textured, impasto-laden expressionism aligned with the School of Paris models cherished by his generation of Indian artists; such a practice also accorded well with the attitudes favoured by their counterparts in London in the aftermath of World War II… Later during the mid-1960s, he passed on to a freer handling from a painterly viewpoint; he seemed to conjure his figures from flame and cloud.’ (R. Hoskote, p. 5). This quote wonderfully encapsulates the spirit of the Sitting Figure. Colour is Mehta’s winning device here. The individually coloured parts help delineate the image, define it and purposefully set it apart from the background so that there is a renewed focus on the subject.