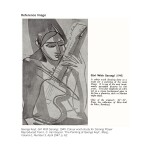 One of Sri Lanka’s venerated 20th century artists, George Keyt was self-taught and only began to paint seriously at the age of 26. In 1946, Keyt left his native Sri Lanka for India, a place that was to become his spiritual home. Inspired by the landscape and traditions of India, Keyt is recognised for his sensuous depiction of women within rustic settings, as is the case with the current painting, painted in the same year.

His evident delight in the feminine form was influenced at least in part, by classical Hindu sculpture. 'The experience of once again living in India, the India to which in spirit he has always belonged, induced him to re-explore his favourite subject... He employed all his resources, springing line, rhythmical form and glowing colour, to imbue his subjects with innocent sensuality and poetic charm.' (W.G. Archer, India and Modern Indian Art, George Allen & Unwin Ltd., London, 1959, p. 135) This confluence of styles is clearly evident in Keyt’s work, where traditional subject matter and iconography is modernised with Cubist forms and a Fauvist palette. While he was inspired by artists such as Pablo Picasso and Henri Matisse, his painting was not merely an adoption of Western modernism, but a carefully constructed unique style which blossomed when he joined the celebrated ‘43 Group’ of Sri Lankan artists who preceded the Bombay Progressives. 'His distinction has been to assimilate such Western influences, while remaining unmistakably Eastern - a process all the more natural in that Western Art had first assimilated certain Eastern influences,' wrote Sir Herbert Read. (George Keyt: A Centennial Anthology, The George Keyt Foundation, Colombo, 2001, p. x)

This painting is executed with crisp and bold lines, yet the soft and careful application of paint gives it a soft touch. Here we see a young woman with her sarangi, rendered with distinct tenderness. In a dual contemplation of face and body, where her limbs are both gracefully and provocatively intertwined, Keyt’s masterful strokes capture a contemplative moment. The makings of this painting can be seen in an earlier sketch from 1945. ‘A colour wash drawing as a study for a painting of the same theme. It is one of the most imminently successful pictures by this artist.’ (L.C. Van Geyzel, ‘The Painting of George Keyt,’ Marg Volume 1 Number 3, April 1947, unpaginated)