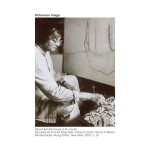 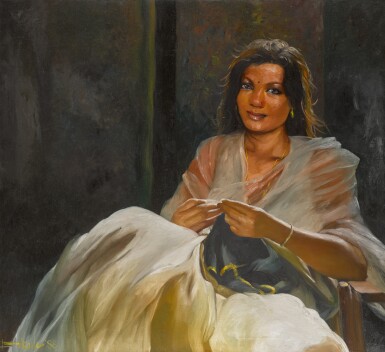 Acquired from the artist at an exhibition at Taj Mahal Palace Hotel, Bombay, 13 March 1986

Bikash Bhattacharjee is arguably one of India’s finest painters whose mastery of figuration is unparalled in the 20th century. The foundations of his art practice are based on the academic realism that was associated with the Government Art Schools. This was in contrast to his peers who chose to distance themselves from the colonial art tradition. Instead, Bhattacharjee looked to the European masters for inspiration, admiring Vermeer and Rembrandt in their ability to alter the atmosphere of a painting with subtle variations in light and tone. However, he subverts naturalism and reality through his Surrealist, dream-like compositions.

Bhattacharjee often placed his central subject slightly off-centre and gave them a direct gaze that unnerves the viewer. His highly finished technique meant there were minimal visible brushstrokes making many of his paintings appear like photographs or stills from a film. "What you see is a single moment in time... Painting should be like this. It should have a mystery, a story. My passion for narrative and its sudden arrest was formed during the days when I used to watch films at Film Society. The dramatic narrative fascinated me." (B. Bhattacharjee quoted in S. Sarkar and R. Sarkar, Bikash 2000, CIMA, Calcutta, 2001, cited in S. Bean, Midnight to the Boom: Painting in India after Independence, Thames & Hudson, London, 2013, p. 133)

He was also greatly influenced by the work of American realist painter Andrew Wyeth. Both Bhattacharjee and Wyeth were committed realists and like Wyeth who painted people and places that were familiar to him, Bhattacharjee focused on the life and culture of his home city of Calcutta (now Kolkata), highlighting the daily struggle, corruption and inequalities within society. He admired Wyeth’s treatment of light and shadow, and his use of windows and empty spaces as compositional and evocative devices. (ibid, p. 132) Throughout his career Bhattacharjee was particularly known for his depiction of middle-class Bengali women. 'The relationship between woman and goddess runs through the artist's oeuvre: beginning with paintings of the woman hidden within the goddess, he progresses to images of ordinary women possessed with divine power.' (A. Jhaveri, A Guide to 101 Modern and Contemporary Indian Artists, Mumbai, 2005, p. 20).