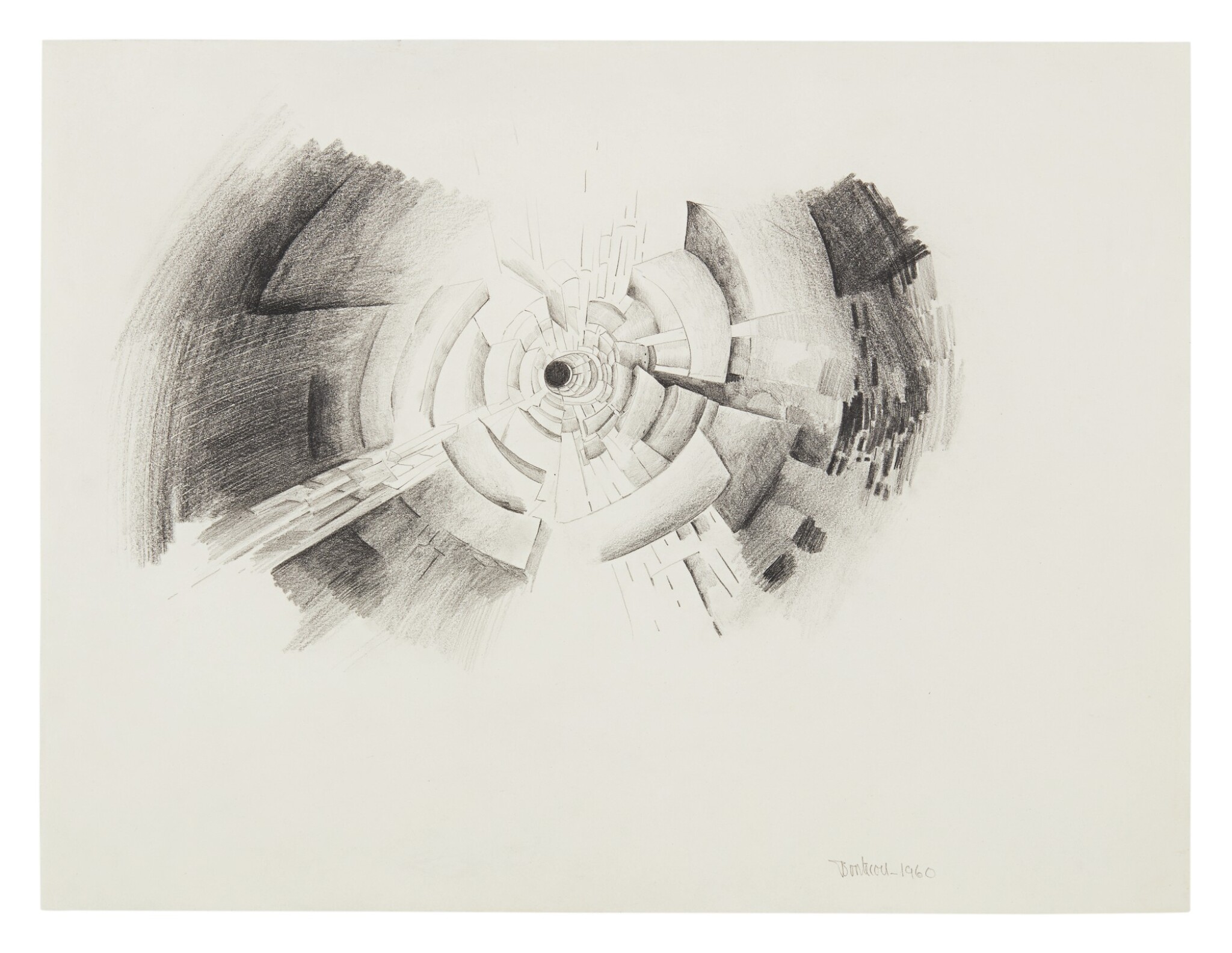 This work is in very good condition overall. The sheet is hinged along the edges of the reverse to the backing board. There is a ½ inch soft crease at the lower right corner, visible upon close inspection. There is a faint pinpoint accretion at the lower right corner, 1 inch from the right edge and 4½ inches from the lower edge, visible upon close inspection. There are two areas of faint discoloration likely inherent to the artist’s working method; the first along the central upper edge measures ½ inch, the second measuring 3 inches along the central lower edge, visible upon close inspection and under ultraviolet light. Under ultraviolet light inspection, there are some areas of minor discoloration to the edges from prior framing and some pinpoint areas of fluorescence throughout due to both the nature of the paper and from prior cleaning, not visible to the naked eye. Framed under Plexiglas.

“Since my early years until now, the natural world and its visual wonders and horrors – man-made devices with their mind-boggling engineering feats and destructive abominations, elusive human nature and its multiple ramifications from the sublime to unbelievable abhorrences – to me are all one. It is in the spirit of this feeling that the primary influences on my work have occurred.”

One of the few female artists to have received recognition in the 1960s, Lee Bontecou is primarily known for her sculpture and for the recurring image of a circular, haunting void. This motif carried over to a extensive drawing practice, from which Untitled (1961) is an extraordinary example that communicates the power and mystery provoked by her most notable imagery. Bontecou’s body of work stems from the period of postwar abstraction, but avoided ever being formally in tandem with their practices or output. While remaining deeply personal and individual in the scope of her work through to this day, she has drawn praise from other artists well known to us– among them Donald Judd, Joseph Cornell and Eva Hesse, all of whom have written or commented about Bontecou and her work.

Bontecou’s most celebrated works from the late 50s and early 60s defy the boundary between canvas and sculpture, consisting of light metal frameworks in organic shapes and strewn together with pieces of canvas and sometimes other objects. Growing up in Westchester county, Bontecou’s parents were both deeply involved with machinery and craft – her father and uncle invented the first aluminum canoe and her mother worked in a factory wiring submarine transmitters during World War II[1], something that would inspire Bontecou’s choice of media and working methods.

The present work was made concurrently to her Plate sculptures. In this work as with the Plates, a powerful and ominous circular shape dominates, arousing deep feeling as it elicits in the viewer associations with an explosion, a hurricane, a tornado, or a black hole. As noted by the artist herself, her primary inspiration throughout her artistic career has been both nature and machinery; moreover, it is their unison, and like with her Plates, sculptural canvases/canvas sculptures, the boundary is often blurred between one thing and the other. Some drawings by the artist from 1961 include the same image but with more context, as these dark voids are portrayed as the central circular element from a gas mask, some with “U.S.A.” written on them, recalling fear of the Cold War and more directly, nuclear war. Others strongly resemble machines or cities and provoke a fear of industrialization in the post war Baby Boomer era, as many of these machines appear to have so much as teeth that threaten destruction to humanity.

As Curator Elizabeth T. Smith has noted in the exhibition catalogue for her 2003 retrospective at the Museum of Contemporary Art (that would later travel to the Hammer Museum in Los Angeles and the Museum of Modern Art in New York), “Bontecou has consistently emphasized that her intention in the use of blackened voids as an integral and compelling element within her sculpture was to evoke mystery and a range of emotive responses to the unknown, the wonderous, and the sublime. At the same time, her work also refers to the underbelly of human nature, encompassing fear, violence, brutality, and war[2].”

She was known to work in her loft while listening to radio news broadcasts, which at the time would have heavily covered the Cold War and the Space Race, technological advancements and social outcry. She was inspired by things outside of herself and put this into her work in a way that was personal by provoking emotional responses and a psychological identification with a bespoke darkness. At the same time, Bontecou frequented galleries and New York Museums, being inspired by traditional cultures, modern artists and dinosaur bones, as well as her contemporaries and their work. While seemingly unrelated, all of these things find a synthesis and universality in Bontecou’s oeuvre. For MoMA’s 1963 exhibition Americans, she stated that her aim was to “build things that express our relationship to this country – to other countries – to this world – to other worlds – in terms of myself. To glimpse some of the fear, hope, ugliness, beauty, and mystery that exists in all of us and which hangs over all the young people today[3].”