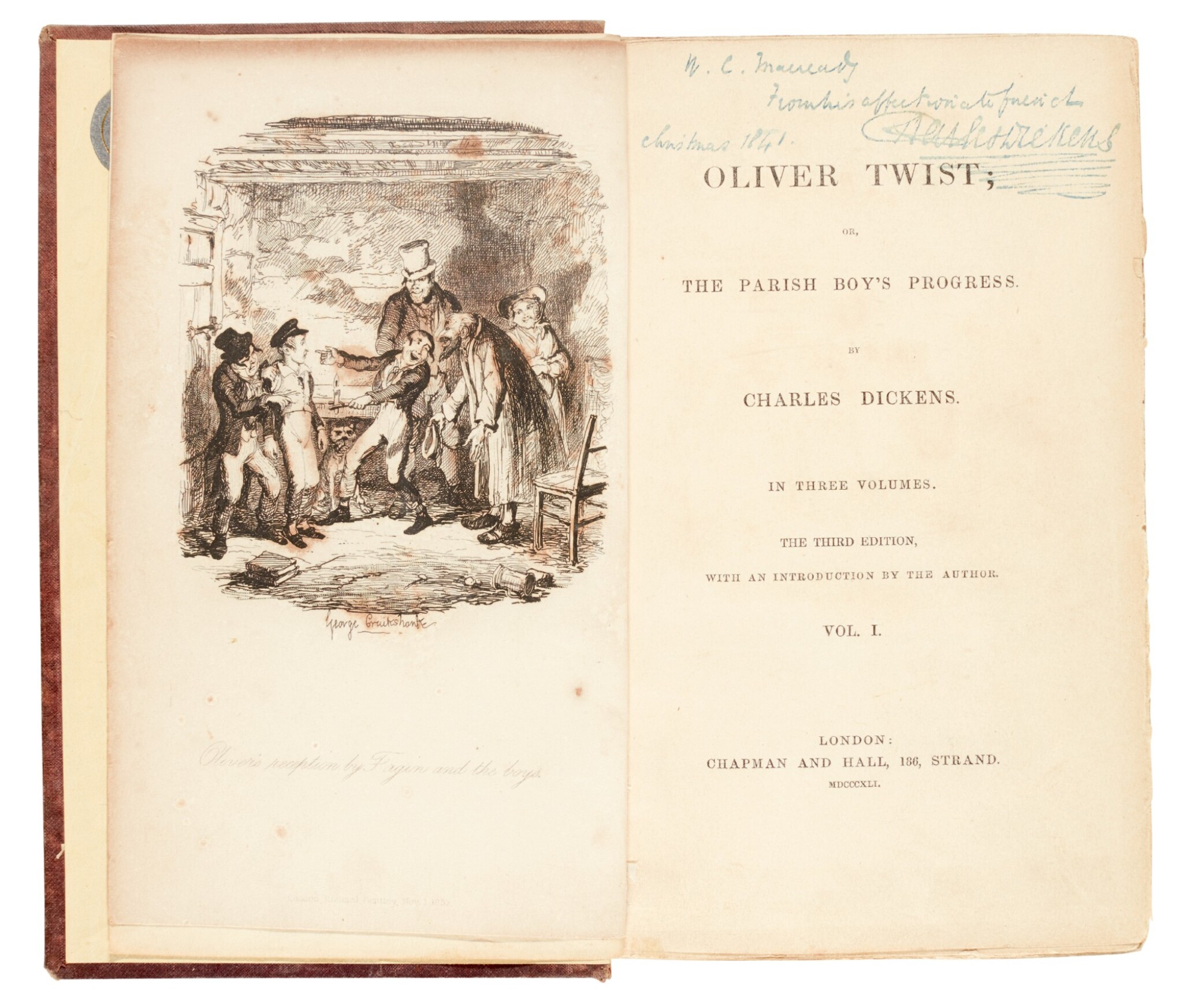 Oliver Twist; or, the Parish Boy’s Progress...The Third Edition. With an Introduction by the author. London: Chapman and Hall, 1841

A MAGNIFICENT PRESENTATION COPY INSCRIBED BY THE AUTHOR TO ONE OF HIS CLOSEST FRIENDS AT CHRISTMAS 1841, JUST BEFORE DICKENS AND HIS WIFE LEFT FOR AMERICA. This new edition of Oliver Twist, published on 15 May 1841, adds the author's defence against the criticism he had encountered for setting his story in London's underworld ("...I confess I have yet to learn that a lesson of the purest good may not be drawn from the vilest evil...I saw no reason, when I wrote this book, why the very dregs of life should not serve the purpose of a moral...")

Dickens wrote to Macready on 27 December, just before attending the first night of Macready's second stint as manager of the Theatre Royal, Drury Lane (where his actor-manager friend played Shylock in The Merchant of Venice), wishing him "Health and happiness for many years, all the merriment and peace I wish you" and sending him "my latest pieces". The Pilgrim Edition of The Letters record these as being inscribed copies of The Old Curiosity Shop and Barnaby Rudge. It seems probable that the present inscribed copy of Oliver Twist, published earlier in the year, was dispatched at or around the same time (see Letters of Charles Dickens, volume 2, p.453). These last few days before departure to America were a time of farewells to his closest friends, such as Macready and Angela Burdett-Coutts.

The distinguished actor and theatre manager William Charles Macready (1793-1873), who dominated the English stage for more than twenty years and restored the status of the nineteenth-century English theatre, was one of Dickens's most intimate friends. They had been introduced in Macready's rooms by Forster on 16 June 1837, when they both had growing families. They immediately struck up a close rapport, their wives also became friends, there were "dinners, parties, expeditons and visits" (Tomalin p.89) and Dickens was soon attending Macready's rehearsals and first nights as a matter of course. Often the novelist would take the latest number of the novel he was writing round to Macready and read passages aloud to him (the actor famously sobbed while Dickens read from The Chimes). In 1839 the author dedicated Nicholas Nickleby to him, and in the same year named his third child Kate (Katie) after his friend. When, having been "haunted by visions of America, day and night" he finally embarked on his first tour there in January 1842, it was Macready to whom he left care of his children during his and Catherine's absence. In 1851, upon Macready's retirement from the stage, Dickens gave the celebratory speecch. Their warm and trusting relationship continued unbroken until the novelist's death.

As an actor Macready was best suited to the great tragic roles and showed immense intellectual ability in penetrating and expresssing the psychological nature of his characters. He enjoyed celebrated tenures at the Covent Garden and Drury Lane theatres between 1837 and 1843, both as producer and actor. His career is all the more remarkable in that he overcame an intense dislike of theatrical life as a young man (his father, the Irish actor and manager William Macready, had been imprisoned for debt in 1808, as would Dickens's own father sixteen years later) and his business dealings were hampered by his passionate temper, which he himself acknowledged as "the stumbling block of my life" (Diaries, I, 507). Having made his valedictory appearance at Drury Lane in June 1843, as Macbeth, he set sail from Liverpool on 5 September 1843 for his first tour of America. After successful appearances in New York, Philadelphia, Boston, Baltimore, St. Louis, New Orleans and Montreal he returned home a year later £5500 the wealthier. His second American tour, between September 1848 and May 1849, was less successful. The American actor Edwin Forrest held a grievance against him for alleged ill-treatment during his 1845 London tour, and, buoyed by a nationalist undercurrent sweeping the country following somewhat unfavourable accounts of America by Dickens and others, mounted a hostile campaign against his English counterpart, replicating his roles wherever possible. The campaign culminated in a disturbance at the Broadway Theatre, New York, on 10 May 1849, when between 17 and 20 rioters were killed by troops (see Michael Slater, Oxford DNB).

For another work inscribed to Macready see lot 75.