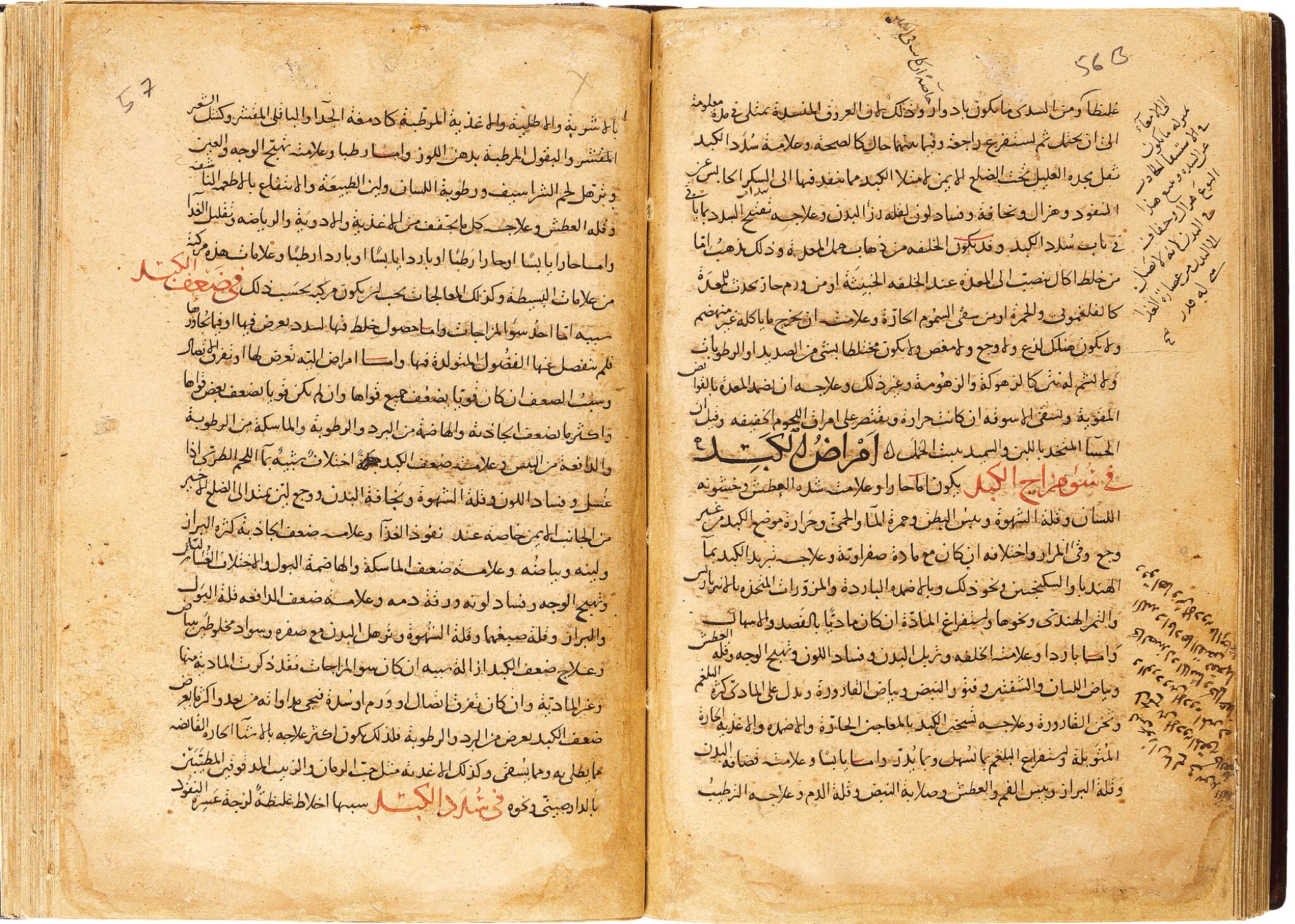 Arabic manuscript on brown paper, 126 leaves plus 2 fly-leaves, 21 lines to the page, written in naskh in black ink, chapter headings and important words in red or bolder black, in later leather binding with flap

The margins have been cropped, several annotations throughout, the pages have been restored, especially towards the edges, various stains and smudges, the page numbered with European numerals on the upper edge, the binding modern, as viewed.

This copy of al-Samarqandi's masterpiece was copied during the lifetime of the author, and possibly under the author’s supervision himself. It is the earliest recorded manuscript of al-Samarqandi's. Its importance lies in the fact that the numerous commentaries in the margins have been integrated in later versions of the volume, supporting the hypothesis that this copy was used as an original model, rendering the margins of high importance. This is especially pertinent if we compare the manuscript with the copy dated 668 AH/1269 AD now in the British Library (Or.5687).

Abu Hamid Muhammad b. ‘Ali ibn ‘Umar Najib al-Din al-Samarqandi (d.1222 AD) was a prolific author on medicine and pharmacology. He was active in Samarqand at the end of the twelfth century and died during the sack of Herat in 1222 AD. The Kitab al-asbab wa'l-‘alamat, also known as al-Najibiyyat, presents itself as a compendium of remedies and pathology for the physician, listing causes, symptoms and treatments. The treatise was very popular and the object of several commentaries and abridgements [among the most famous ones, the commentary by al-Kirmani (d.1449)].

His text is also particularly interesting from an etymological point of view. An analysis of the origin of the medicaments listed points towards a strong Indian-Persian influence (more than 50% of the names of drugs are Persian or Sanskit in origin while only 17% are Greek, compared respectively to 31% and 23% in al-Kindi’s works). The higher number of words etymologically connected with Persia and India is a testament to the strong connections which linked Central Asia and the Indian Subcontinent. While Indian spices and medicaments were once considered prestigious and expensive articles, their presence in pharmaceutical compendia attests to a shift in this trend, and therefore a wider availability on the market and an increase in trade with Central Asia (see Amar and Lev 2017, pp.230-1).

An interesting aspect which makes this manuscript exceptional is the dense commentary in the margins in which first person ‘I say’ (aqulu) is often used rather than the usual and more common ‘he said’ (qala). As this manuscript was written during the lifetime of the author, it is possible that the marginal notes were comments by the master Najib al-Din al-Samarqandi himself, dictated to the scribe. These commentaries were integrated into the later versions (see the copy in the British Library, inv.no.Or.5687) and became part of the main text.