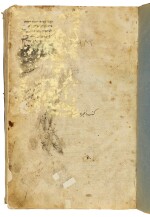 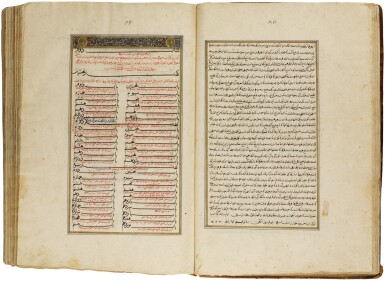 Persian manuscript on cream paper, 656 leaves, plus 2 fly-leaves, 1 replacement page at the end, 29 lines to the page, written in naskh in black ink, indexes and chapter headings ('unwar) written in Eastern Kufic or bold cursive, decorated in gold and polychrome and often ruled in gold and blue, keywords picked out in red, various Hebrew inscriptions in different hands, in light brown leather binding

The manuscript is overall in good condition, the margins are clean, only occasionally restored (f.2), the lower edge pf the paper have most probably been mice bitten, minor stains not affecting the text, Persian numeral written on the top in pencil, some annotations in pen and pencil, mainly in the margins but occasionally over the text as well, written both in Persian and in Hebrew, minor smudges to the illuminated headings, the last folio replaced, the binding with minor damages, as viewed.

The author and the text

Zayn al-Din Jurjani, often called al-Sayyid Isma’il (as in the current manuscript) was a notable physician who wrote in Persian and Arabic during the twelfth century. He first moved to Khwarizm in 1110 AD where he worked under the patronage of Qutb al-Din Khwarazm Shah Abu’l-Fath Muhammad ibn Yamin-al-Din (r.1097-1127 AD) and Atsiz ibn Muhammad (r.1127-56 AD) and later moved to Marw, where he worked until his death 1136 AD. He was a prolific author, writing mainly on philosophy and medicine alongside the Zakhirah, it is worth mentioning the treatise al-Khuffi al-‘Ala’i, a shorter version of the Zakhirah dedicated to Atsis ibn Muhammad, who was keen to have something he could carry in his boots (khuff).

The Zakhirah, which is dedicated to Qutb al-Din Khwarazm, and it is probably the first medical encyclopaedia written in Persian, supplying information on every branch of medical science, saving a physician the trouble and loss of time involved in consulting other books.

The Zakhirah consists of ten books (kitab), which are enumerated in the preface, and to each of which is prefixed a full table of numerous subdivisions termed Guftars and Babs. They are as follows:

I. Definition and utility of medicine; composition, structure, and powers of the human body.

II. Health and disease; causes and symptoms of disease; accidents of the body.

V. Fevers, their various kinds, their symptoms and treatment.

VI. Local diseases and their treatment.

VIII. The care to be taken of the external parts of the body, hair, skin, nails etc.

There are twelve various volumes in the Wellcome Library, London (see F. Keshavarz, A Descriptive and Analytical Catalogue of Persian Manuscripts in the Library of the Wellcome Institute for the History of Medicine, London, 1986, pp.149-154, no.43). An early copy started in the year 664 AH/1266 AD is now in Patna, published in Catalogue of the Arabic and Persian Manuscripts in the Oriental Public Library at Bankipore, vol.12 (Patna: Government Printing, Bihar, 1927), pp.3-7. Complete copies of the Zakhirah are very rare. A volume containing books I-VIII was sold in these rooms, 1 May, 2019, lot 10; another copy containing books I-III sold in these rooms, 20 April 2016, lot 9.

The Zakhirah was one of the most important works of its kind and has been translated into Arabic, Turkish and also Hebrew (in an abbreviated form).

An ownership note in Persian on f.1a of the work to hand describes the manuscript as complete and records that it entered the library on 8 Rabi'ii 1105 AH (7 December 1693).

Along with other annotations in Persian, on f.1a there is an ownership inscription in Hebrew which reads: 'I purchased this book on Thursday which is Lag BaOmer the day of celebrating/commemorating Rabbi Shimon Bar Yochai, may his merit protect us Year 5674.' Lag BaOmer is a Jewish holiday marking the hillula of Rabbi Shimon bar Yochai, and the year 5674 fell on Thursday 14 May 1914. Further Hebrew inscriptions, in different hands, attests that the manuscript was annotated and reviewed at a later date.