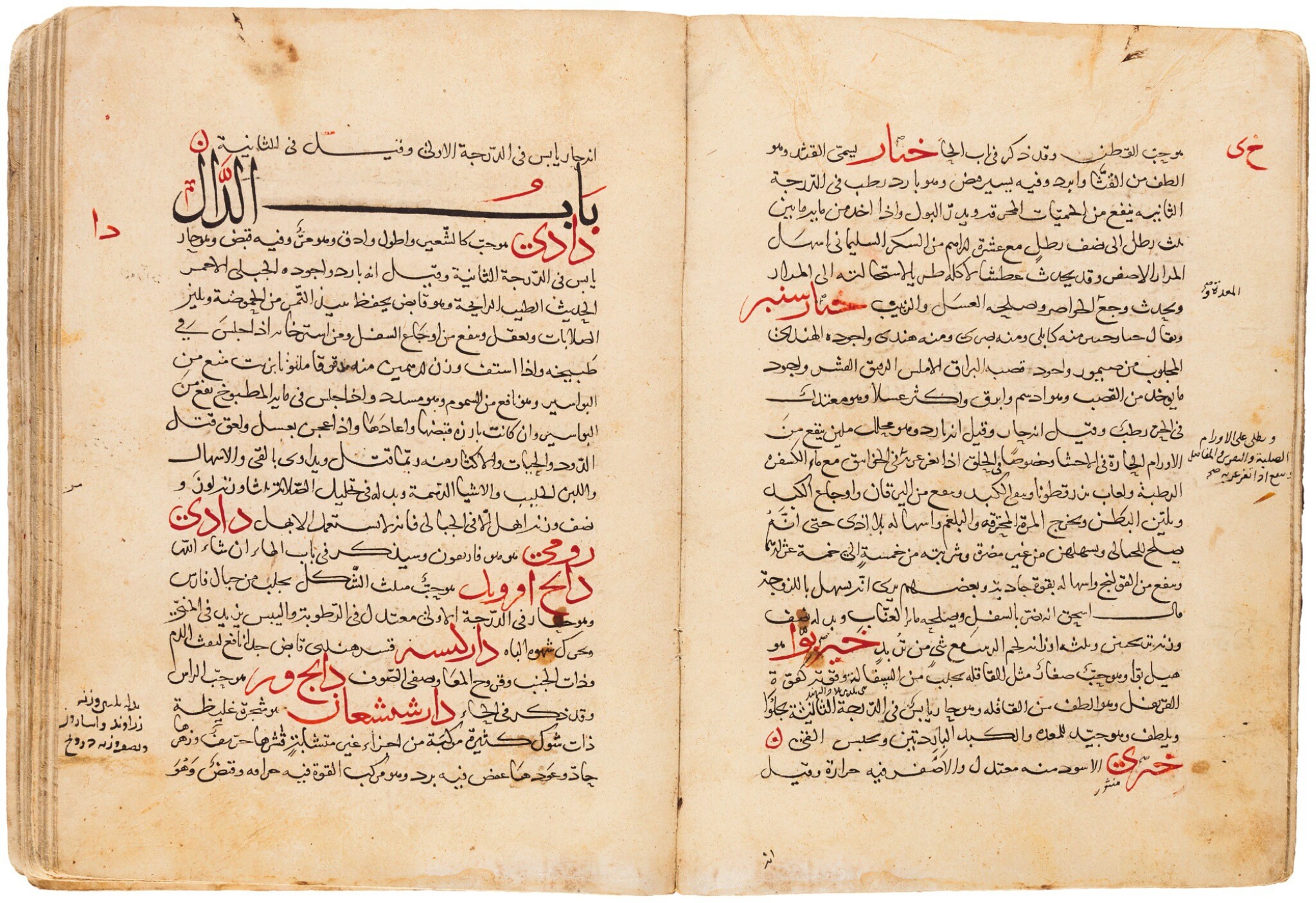 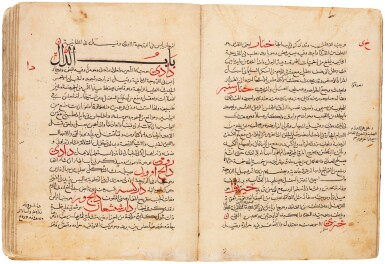 Arabic manuscript on thick cream paper, 235 leaves plus 2 fly-leaves, 21 lines to the page, written in naskh in black ink, important words and headings in red, bab headings in bold black, in a brown leather binding

In good condition, the margins have been trimmed and occasional marginal notes and commentaries are not complete, notes on the margins in different hands, several ownership inscriptions and seals, minor stains and smudges, some pages affected by dump and humidity and restorations, the binding with losses, as viewed.

Abu 'Ali Yahya ibn 'Isa b. Jazlah al-Baghdadi, Latinised as Ben Gesla, was born in al-Karkh, a district of Baghdad, in circa 1030 AD. He was raised as a Christian but around 1073 AD converted to Islam. He studied medicine with Sa’id ibn Hibatullah (d.1101 AD) and then joined the court of the Caliph al-Muqtadi (r.1075-94 AD) for whom he worked as a physician. He also served the community by acting as secretary to the Hanafi kadi of Baghdad. Christian physicians were prominent in the early Abbasid era, and Sa’id ibn Hibatullah, ibn Jazlah’s master, was himself a Christian who converted to Islam. Ibn Jazlah is renowned for both works on medicine and pharmacology: the Taqwim al-abdan fi tadbir al-insan is an example of the first group, representing a medical synopsis of more than three hundred and fifty diseases. The Minhaj al-bayan, on the other hand, is probably his most famous work connected on pharmacology.

The Minhaj al-bayan is dedicated to the Caliph al-Muqtadi and it presents itself as a collation in alphabetical order of food and drugs. The manuscript is arranged in alphabetical order; it starts with an introduction in which the author numbers his sources: Hippocrates, Dioscorides, Galen as well as Hunayn ibn Ishaq and al-Razi. It is then followed by chapters (bab). Each bab is dedicated to a letter of the alphabet and lists all the foods and drugs starting with that letter. Along with the basic medical information, Ibn Jazlah also provides descriptions of their smell, taste, colour and side effects. In bab al-kaf, for example, the author deals with camphor (kafur), categorising it in four types and listing the benefits of each category (some types used to cure inflammation, nose bleeding and scorpion bites, and other types for dying the hair black). Bab al-hein starts with lentils (‘adas), the different way of cooking them (with water or vinegar), their nutritional properties and the benefits of using them as a remedy for swollen eyes.

This treatise in important both for the contribution to pharmacology, a science which was especially developed in the thirteenth century with Ibn al-Baytar, and because it attests to an interest in a culinary tradition established in Baghdad during the Abbasid tradition (for additional information on Ibn Jazlah and the Abbasid gastronomic tradition see N. Garbutt, Ibn Jazlah: the forgotten Abbasid gastronome, J Econ Soc Hist Orient 39:42-44, 1996; (https://brill.com/previewpdf/journals/jesh/39/1/article-p42_2.xml).

Six copies of the Minhaj are in the British Library, including a very early one dated 489 AH/1096 AD (inv.no.Or.7499). Another copy dated 972 AH/1564 AD is in The Wellcome Historical Medical Library (inv.no. WMS.Or.44). Two copies are in the Islamic Arts Museum Malaysia (inv.no.IAMM.2000.2.218 and IAMM.2016.11.22), the latter contemporaneous with the current manuscript. Another copy is in the Thomas Fischer Rare Books Collection, University of Toronto (accessible online at https://archive.org/details/minhajalbayanfim00unse). A copy was sold in these rooms 28 April 2004, lot 19; another sold at Christie’s London, 5 October 2010, lot 85.