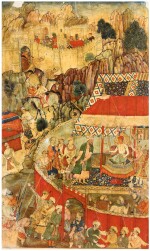 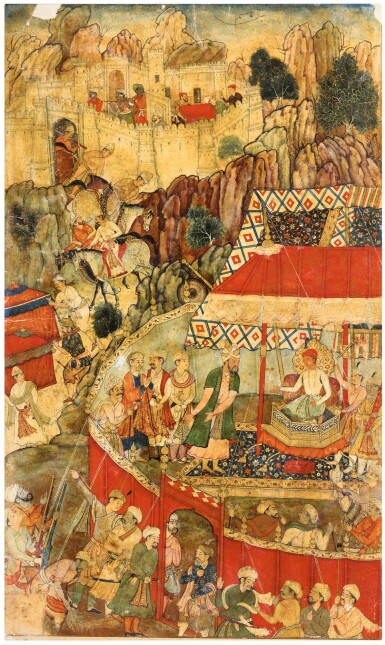 gouache with gold on paper, reverse with a Qajar calligraphic panel signed by Mir Abd al-Rahim and dated 1259 AH/1843 AD

The page stuck down on card, horizontal creases particularly visible on each side of centre, further creases including vertical along top and lower edge, another crease running diagonally across lower right-hand side, two notable tears to top edge (mainly in sky); small tear to centre near one of courtiers faces, discoloration throughout and some mould stains, some losses to areas of white paint, lower left-hand corner with square left blank and rubbed buckling of paper _ possibly at time of pasting down on card or moist conditions of storage, a varnish coating gives the overall painting a slightly yellowish tinge, we would recommend contacting a professional restorer for further advice on conservation and potential restoration of this painting, the reverse with later calligraphy stuck down on card, as viewed.

This episode probably depicts the conclusion of the siege of Mankot, which occurred during the summer of 1557. Sikander Shah of the Suri dynasty, who had taken refuge in the fort of Mankot, surrendered to the besieging imperial forces on 25 July 1557. He then sent messages of supplication through Akbar's envoy Atka Khan and Bairam Khan's deputy, and professed loyalty to the young emperor. Bairam Khan, the Khan-i-Khanan, petitioned Akbar on Sikander's behalf and as a result Sikander was accepted into the emperor's service and awarded the jagirs of Kharid and Bihar, although he soon fell out of favour again (Abu'l Fazl, Akbarnama, tr. H. Beveridge, reprint, Delhi, 2002, vol.2, p.90-91).

There are several diagnostic aspects of the present illustration that point to this episode. Firstly, the fortress in the mountains behind the encampment, with horsemen and palanquins emerging and soldiers carrying booty within the fort, suggest a recently ended siege and conquest of a mountainous fortress. Secondly, some of the mounted soldiers leaving the fort are wearing distinctive Afghan headdress. Thirdly, Akbar is portrayed as a boy, suggesting that the episode occurred in the first few years after his accession in 1556 (he was born in 1542, was thirteen at his accession, and would have been fourteen years and nine months at the time of the siege of Mankot). Fourthly, the figure of the courtier before him wears a Humayuni turban, the taj-i izzat, which was a type worn by only a few courtiers who had previously been in the service of Humayun. One of these was Bairam Khan, Akbar's guardian and the Khan-i Khanan, who was often portrayed wearing this distinctive headdress. The facial features of the courtier are also close to other depictions of Bairam Khan (for example, a scene of Akbar learning to shoot in 1555, see J. Losty and M. Roy, Mughal India, Art, Culture and Empire, London 2012, fig.31, p.69).