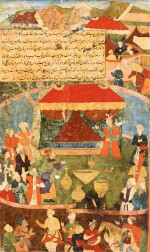 Laid down on card, with associated buckling and some staining and discoloration to pigments possibly due to when pasted down or moist conditions, some foxing and rubbing particularly visible on green tent drapes in centre, some losses to faces, creases throughout, notably along horizontal upper section and one square on left-hand side, a small tear to upper right-hand side, the text with some smudges, overall appears to have been covered with a varnish coating leaving a slightly yellow tinge, we would recommend contacting a professional restorer for further advice on conservation and restoration, borders orange with blue marbled paper edges with tears, as viewed

The episode depicted in this illustration occurred on 12 June 1548 at Qara Bagh north of Kabul when Humayun and his Mughal forces were on their way to Badakhshan. The seven lines of Persian text on the painting describe the scene accurately and translate as follows:

"... and Qasim Husain Sultan, who was in Bangash, also came and did homage, and was favourably received. At the same stage, Mirza Ibrahim under the guidance of an auspicious star came poste-haste and paid his respects. The lights of special favour were shed on the forehead of his fortune. One of the wonderful things which were the heralds of countless victories was that when he was about to proceed to Badakshan, his Majesty was standing in the ewer-room. Suddenly it occurred to his sanctified mind that 'if this white bird (referring to a cockerel which was always in the room) come upon my shoulder and crow, it will be a sign of victory.' As soon as he had this thought, the auspicious bird came flying and flapping its wings like a huma, perched on his shoulder, and cast an auspicious shadow over the head of fortune." (Abu'l Fazl, Akbarnama, English translation by H. Beveridge, reprint, Delhi, 2002. vol.1. p.525).

The artist has included both the general and specific aspects of the scene, with a tented encampment, a group of courtiers paying homage (one, probably Qasim Husain Khan or Mirza Ibrahim, wearing a taj-i izzat turban and clasping his hands in supplication), a prominent group of brass ewers and basins on the ground, and the white cockerel perched on Humayun's shoulder. Interestingly, there are two words that differ in the text on the present page from the 1877 Asiatic Society of Bengal Calcutta Persian edition of the Akbarnama. Near the middle of third line of text is the word rozgar, which is absent from the published edition. Near the middle of the fourth line the word maukib appears in the printed edition but is absent here (for the published Persian text see Abu'l Fazl, Akbarnama, Persian edition, Asiatic Society of Bengal, Calcutta, 1877, vol.1, p.274. For comments on the textual differences of the various manuscript and printed version see Stronge 2002, pp.41-45).