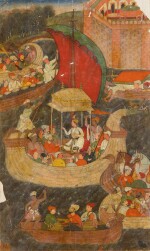 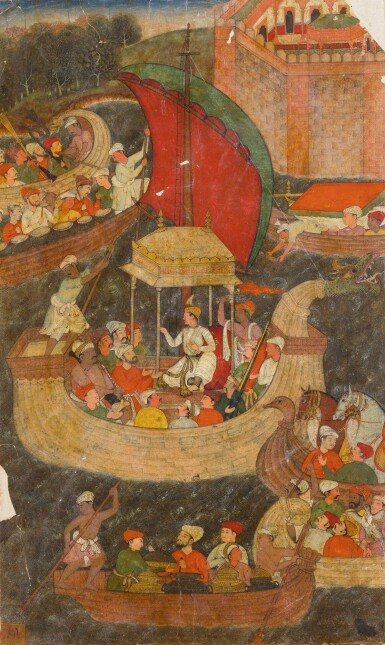 gouache with gold on paper

The page laid down on card with associated bucking of paper and associated discoloration, creases throughout, notable crease along straight horizontal line in centre suggesting it may have once been folded along this line, vertical white chalky diagonal line running across part of painting, a varnish appears to have been applied to surface with resulting yellowish tinge throughout, some tears notably to right-hand corner and lower left-hand edge, rubbing to ink on lower left-hand corner square, and minor losses, we would recommend contacting a professional restorer for advice on conservation and restoration; as viewed.

The episode here probably relates to Akbar's journey to the Eastern Provinces by boat in 1574. This expedition was undertaken in order to quell the rebellious Daud and his forces. The text describes in detail the preparations made to travel by boat and the departure of the royal party on 15 June 1574 (for the relevant passages see Abu'l Fazl, Akbarnama, tr. H. Beveridge, reprint, Delhi, 2002, vol.3, pp.120-135). There are several diagnostic details in the present illustration that are specifically mentioned in the text and therefore point to this episode. These include the presence of Akbar himself seated under a canopy in the large central boat, the elaborate design of the boats, including the animal-headed prows which the Akbarnama specifically mentions (here we can see that Akbar's boat has a dragon-head prow and among the others are a ram's head, a duck or goose and a second dragon on the uppermost boat) and the choppy water. Furthermore the large fort in the background on the far side of the river that suggests that the royal party is departing or arriving, and thus it could be intended to represent either Agra or one of the forts down river where the royal party sojourned on their way, or indeed Patna itself, where the royal party arrived by boat on 3 August 1574. Akbar also appears to be the right age for the year 1574, when he was 32.

However, this episode is part of the section in the Victoria and Albert Museum and it would be unexpected that an illustration from that section was separated and dispersed, since all the other dispersed pages from the 'First' Akbarnama illustrate episodes from the years before or after those in the Victoria and Albert Museum section, which span the years 1560 to 1577. Indeed, a similar scene from later in Akbar's campaigns to the Eastern Provinces is in the Victoria and Albert Museum (IS.2:101-1896; the episode occurred in July 1576, see Abu'l Fazl, Akbarnama, tr. H. Beveridge, reprint, Delhi, 2002, vol.3, pp.248-258). An explanation for this may lie in the process by which the manuscript was assembled, which was not a straightforward one of the text being finished and then handed to the artists to illustrate. Sue Stronge has demonstrated that the choice of events to be illustrated could have been decided upon (by Akbar himself) several years before the final version was completed and that changes were then made to the pagination and placement of the illustrations within the manuscript, as well as alterations to the wording of the text associated with specific images (Stronge 2002, pp.42-45). For comparison, the two equivalent illustrations of this episode from the 'Second' (British Library/Chester Beatty) Akbarnama are in the Philadelphia Museum of Art (1967-30-389) and formerly the Pozzi Collection (see E. Blochet, 'Les Peintures Orientales de la Collections Pozzi', Bulletin de la Societe Francaise de Reproductions de Manuscrits a Peintures, 12e Annee, Paris, 1928, pl.XXVII).