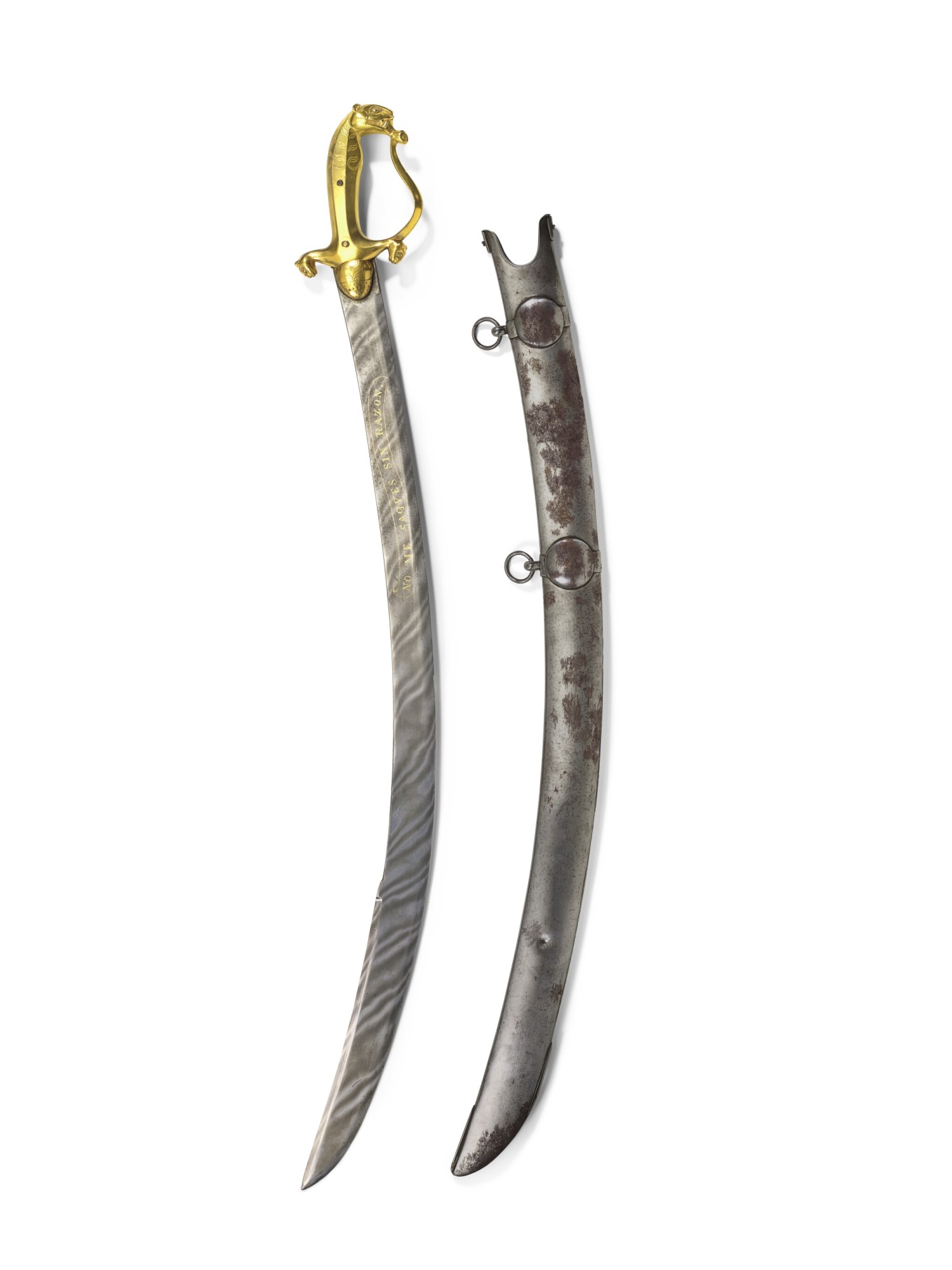 with robust blade of kilig type forged with a pronounced watered bubri pattern over its entire length and inlaid with the European two-part inscription 'No Me Embaines Sin Honor' and 'No Me Salves Sin Razon' in gold letters each on a gold scroll over the respective sides, brass hilt cast in one piece enriched with punched and engraved detail, comprising a pair of short quillons with tiger's head terminals, a pair of asymmetrical langets, the inner punched and engraved with bubri motifs and the outer decorated with a tiger's mask cast in low relief, knuckle-guard formed en suite with the quillons, slender faceted grip decorated with engraved bubri panels over its upper half, and the pommel formed as a tiger's head in the round, in its European steel scabbard

The blade with some oxidisation and slight erosion particularly near the forte, the sharp edge of the blade with few knicks, two scratch lines running down horizontally, the hilt with some remanence of cleaning material and very light scratches, the hilt with patches of herosion and rust, as viewed.

“Better to die like a soldier than live a miserable [life] dependent on the infidels… I would rather live two days as a tiger, than two hundred years as a sheep” (Tipu Sultan, Tiger of Mysore (1750-1799)).

Haydar Ali (1721-82) and his son Tipu Sultan (1750-99) came to power in south India in the 1760s by seizing the state of Mysore from the family of Wadeyar, the hereditary Hindu rulers. By conquest they extended their territories and conducted four wars against the East India Company and British troops. In the second of these in 1782, Haydar Ali died and was succeeded by Tipu. The Third Mysore War was concluded with the Treaty of Seringapatam, in February-March 1792 , which forced Tipu to cede territory and exacted substantial reparations; he also had to surrender two of his sons as hostages to deter him from further resistance. Tipu continued to defy the British and in April 1798, sent an ambassador to the Isle de France proposing an alliance with the French Republic against their common enemy. The British intercepted the reply from ‘Buonaparte’ addressed to 'Citizen Tipu' in which Napoleon is “full of the desire of delivering you from the iron yoke of England”. The discovery of this intrigue led directly to the Fourth Mysore War, which culminated on 4 May 1799 with the storming of the fortress of Seringapatam by the British army under General Sir David Baird. Tipu died in the confusion of battle and later that evening his body was identified by General Baird accompanied by Colonel Arthur Wellesley (The future Duke of Wellington). When news reached the British authorities, Lord Harris declared, “Now India is Ours”.

The blade is unique within the recorded group of swords attributed to the ownership of Tipu Sultan in being forged with a distinctive bubri pattern. Tipu’s personal emblem was the tiger and as such all of his belongings and many of those of his courtiers and soliders were emblazoned with tiger stripes or bubris. The bubri was adopted in about 1780 and continued in use until his death in 1799. Tipu’s love of tigers was matched only by his hatred of the British. His name in Canarese means ‘tiger’, and he was given the name by his father, Haydar, in honour of a Muslim saint, Tipu Mustan Oulia, visited by his pregnant mother. The tiger thus symbolised his own name, as well as linking him to the prophet Ali, who was given the title ‘Lion of God’ by the Prophet Muhammad, and to his own father, whose name ‘Haydar’ can mean ‘lion’ or ‘tiger’. The inlaid inscription on this blade was a popular motif amongst French and British officers in the late eighteenth century; it reads in translation: 'Draw me not without reason, Sheath me not without honour'.

A very small number of sword hilts sharing a strongly pronounced tiger theme are closely linked with the personal ownership of Tipu Sultan. One, now in the Royal Collection at Windsor (Windsor, 451) was found on Tipu's body at his death in Seringapatam. Another is in the collection of the second Lord Clive, preserved at Powis Castle. A related sword, formerly in the possession of Viscount Strathallan, was sold in these rooms, 14 April 2010, lot 185.

For a comprehensive survey of the royal swords forming this group see Mohammad Moienuddin, Sunset at Seringapatam, After the Death of Tipu Sultan, New Delhi, 2000.