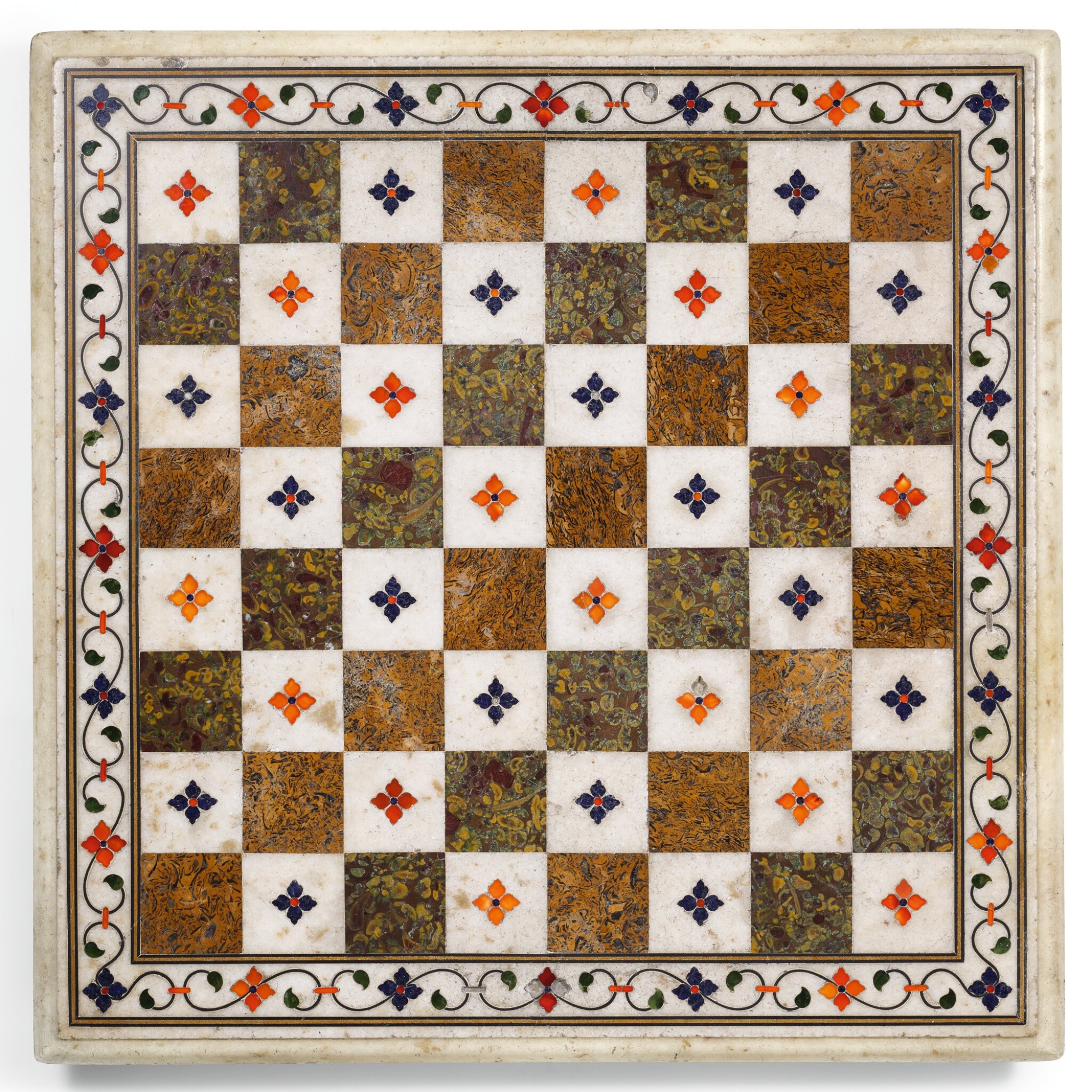 composed of marble, of square form, each square composed of Jaisalmer stone and Sabalgarh marble on a white marble base, the white marble squares featuring a quatrefoil carnelian and lapis-lazuli rosette to the centre, the chessboard framed by an elegant border of quatrefoil rosettes through which runs an elegant s-shaped curved band with leafy ends, also inlaid with carnelian, lapis-lazuli and jade

Most of the inlaid present, one petal to central flower missing, and in border, some abrasion and small chips to extremities, underside with scratches and discolouration, as viewed.

Known under the Mughals as ‘Parchin Kari’, the technique of inlaying precious stones into other precious stones is an ancient one that became particularly fashionable in India via the introduction of European, notably Italian, Pietra Dura works of art. Perfected under the Mughals, the Taj Mahal is an example of the use of this technique on a large scale. The closest comparable example, in terms of the choice of hardstones and their characteristic textures, as well as the design, can be seen on the tomb of Mumtaz Mahal’s grandfather, the Persian nobleman Itimad al-Daula. Also built at Agra, his tomb is today paradoxically nicknamed the ‘baby Taj’, although it was built a little earlier than the Taj Mahal, being completed in 1628. It is an important structure as it was the first mausoleum to be built completely from marble with inlay work. Upon closer inspection of the details of the stones on this monument, we can see the distinctive yellow, amber-like Jaisalmer stone, combined with Sabalgarh marble renowned for its irregular speckling of green, red and orange as on the present chessboard (Michell and Currim 2007, pp.54-55).

The game of chess can be traced to the Indian Subcontinent in the second or third century, although few other known examples of Mughal chess-sets composed of hardstones from the seventeenth century (such as the present) are known. In terms of the technique and material used, it is most comparable to the architectural monuments cited above. In form, it relates to the luxurious games-boards produced from exotic woods and rare materials such as ivory, found in India and datable to the sixteenth century such as the example in the Victoria and Albert Museum, London (inv.no. 1961-1899).